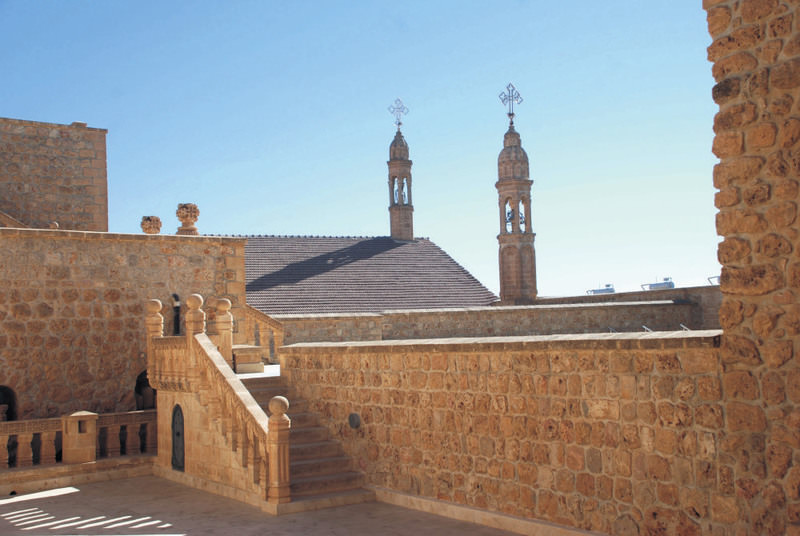 The Mor Gabriel Monastery in Mardin is one of the prominent Assyrian religious complexes in the country and among the few restored Assyrian sites.
by daily sabah Apr 06, 2015 12:00 am

Three ancient Assyrian churches in southeastern Turkey will undergo restoration, as the Turkish government hopes to attract the Assyrian diaspora back to the lands where they once resided.

The restoration project was included in the Southeastern Anatolian Project (GAP) Action Plan. The plan and eponymous project seek to boost development of the southeast whose prosperity was stunted due to decades of insecurity.

The three sites that will be restored are Hah or Anıtlı Church, the Mor Evgin Monastery and the Mor Kiryakus Monastery. A "faith park" will also be built in Mardin's Nusaybin district in an area where the tomb of a descendant of Prophet Muhammad, a historical mosque and the Mor Yakup Monastery of the Assyrian community are located.

A Tourism Master Plan foresees a revival of tourism in the region rich in historical sites, as it is home to the world's many ancient civilizations as a stretch of the greater Mesopotamia region. The master plan will develop new, alternative types of tourism and in turn, boost tourism revenues for the region, and a Tur Abdin Culture Week will be held. Tur Abdin, or Mountain of Servants of God, refers to several areas incorporating Mardin and Şırnak, two southeastern cities, areas that are recognized as the heartland of the Assyrian community in Turkey. Through cultural and tourism activities, Turkey hopes to attract some 300,000 Assyrians with ties to the region, including descendants of Assyrian families that once lived there.

The region where the Southeastern Anatolia Project was launched is known as a hub for several faiths. The Deyrul Zafaran and Deyrul Umur (Mor Gabriel) monasteries, ancient sites significant to the Assyrian community, are also located in the region.

Göbeklitepe is widely regarded as the home of the world's first temple dating back 12,000 years, Mount Cudi where Noah's Ark is believed to be located, Cizre where Noah's tomb is located, and Şanlıurfa where Prophet Abraham and Job are presumed to have lived according to the Islamic faith are all situated in southeastern Turkey. Rumkale or Roman Castle, where John, one of the apostles of Jesus Christ, is believed to have reproduced a copy of the Bible is also located in the region.

Since the Justice and Development Party (AK Party) came to power in 2002, Turkey has sought to restore the rights of minorities as well as temples of minority faiths, from Assyrians to Jews and Greeks. Many properties have been returned to these minorities -- decades after their forceful confiscation by the state, while the government also pursues a policy of restoring abandoned historical buildings.

There are 25,000 Assyrian Christians in Turkey, 18,000 of whom live in Istanbul. Mardin, a city in southeastern Turkey, was once home to a sizeable Assyrian community, but most emigrated abroad.
Last Update: Apr 06, 2015 2:22 am
RELATED TOPICS