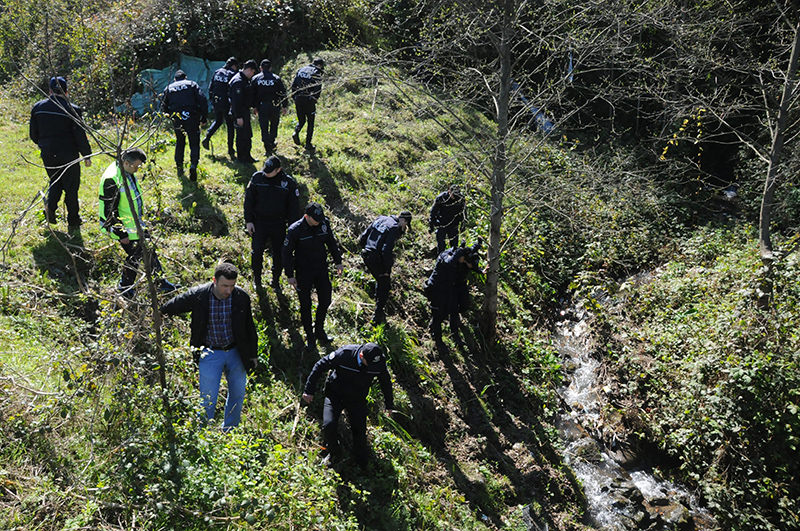 by daily sabah Apr 07, 2015 12:00 am
Turkish police have detained two men following a gun attack on a bus carrying players from Fenerbahçe Sports Club over the weekend, a regional governor said on Tuesday. "Two suspects have been arrested, they are being interrogated," said Abdil Celil Öz, governor of the northeastern region of Trabzon where the attack took place late on Saturday. Speaking in a press meeting, Öz said, "One of the men detained shot at the bus while the other called him on the phone to alert him that it was coming."

The bus was hit by gunfire as it took players from the Istanbul club to the airport after Fenerbahçe's 5-1 victory at nearby Rize. No players were hurt in the attack but the driver suffered facial wounds.

"The present proofs and initial findings confirm the detained suspects," Öz said, adding that there are still legal procedures underway to find the attackers. Öz further said that the bus driver is receiving treatment and his health status is being closely followed. "I examined the driver's current condition. The tomography previously showed it was an armed attack. When the cameras were checked again, it was discovered the driver suffered from two gunshots," he said.

The investigation continues "nonstop," Öz said. A shot gun and other items were found at the scene. The information provided by three citizens has also been taken into account. "The incident is not a terrorist attack, but a local one. However, before the investigation is completed, it will not right to give details," Öz said. Nihat S., 38, and Emre A., 27, were taken into custody by police early yesterday, according to police sources.

According to police officials, two more persons are suspected in relation to the assault. Nihat S., one of the suspects said to his relatives, "No problem" while he was taken away for custody. On a question about how close the car the suspect drove to the Fenerbahçe convoy, Governor Öz said, "There is no specific information on that issue. But, the car in the convoy was recorded by cameras. Even, there are people who said they had seen the suspect in TV footage. We reached the suspects thanks to the information given by them. Another witness confirmed that a suspect had been in the crime scene."

The club said it would not play again until the incident was resolved and the Turkish Football Federation announced on Monday that league games would be suspended for one week.
On Monday, the regional prosecutor said a person had been detained after allegedly making death threats against club players on the Internet.

Meanwhile, Turkish Football Federation President Yıldırım Demirören, Union of Football Clubs President Göksel Gümüşdağ and some club presidents made a get-well visit to the Fenerbahçe headquarters on Monday. During the visit, Fenerbahçe President Aziz Yıldırım made remarks about Dutch star Dirk Kuyt. He said, "Kuyt's wife won't let him go to away matches after the assault. I'm having trouble putting my footballers together."

Fenerbahçe's Czech defender Mihail Kadlec also said, "The assault was the scariest incident I have ever experienced in my life."
Fenerbahçe, who won their 19th Turkish league title this season, are in a head-to-head title race with their Istanbul archrivals Galatasaray and Beşiktaş. The club says it is still a victim of hostility following allegations of match-fixing that have rocked the team for months.

After the Liverpool victory, Beşiktaş on the decline

Following the high of the win over Liverpool in the Europa League, Beşiktaş's form has plummeted, winning just two of the seven games they have played since the famous win. After the Liverpool match, Beşiktaş played seven matches and won only two of them, losing three and drawing in two.

In the last Turkish league match of the week, the Black Eagles drew against İstanbul Başakşehir 0-0 at home on Monday, dropping to third place with 55 points. Both teams had chances in the game, which was played under heavy rain, but both failed to find the back of the net. Beşiktaş appealed for a penalty kick in the second half when striker Demba Ba's header was stopped by the rival defender's hand in the box but the referee did not award a penalty kick. Galatasaray maintain their lead in the Turkish top football division Spor Toto Super League with 58 points after the 4-2 win Sunday against Kardemir Karabükspor, with two goals by the Istanbul team's Dutch star Wesley Sneijder.

Title contenders Fenerbahçe defeated Çaykur Rizespor 5-1 in away match on Saturday. Beşiktaş coach Slaven Bilic said, "We are very disappointed to lose two precious points. Our rivals played a good counter-attack football. Their defense was good too. We had some opportunities but we missed. We could have won." On the armed assault on the Fenerbahçe team bus, Bilic said, "We are all very sorry for the horrible assault. It has nothing to do with football."