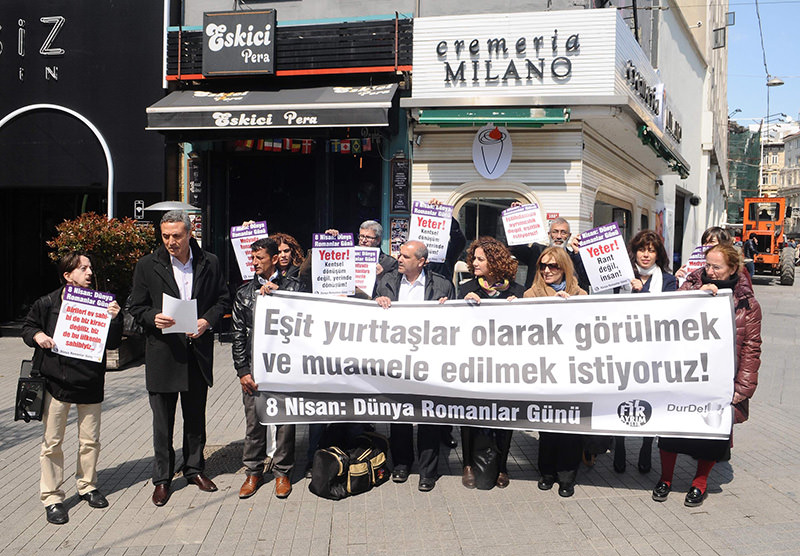 | DHA Photo
by Compiled from Wire Services Apr 08, 2015 12:00 am
The Turkish Romani community marked International Roma Day on Wednesday with several events across the country amid complaints of discrimination.

Romani citizens of Turkey have complained of veiled discrimination, as is the case in other countries, for decades and the lack of any social policies to help improve their status further cast them away from society. The low level of education and alleged blacklisting in terms of employment are among the major problems they face.

Their alienation from society and a prevalent common misperception portraying Romanis as criminal types sometimes lead to clashes, though no tangible tensions exist between society and the Romani minority. Two years ago, a Romani community and locals engaged in fierce clashes after a Romani citizen shot and injured the daughter of a neighbor he had argued with. Earlier this year, the killing of a Romani boy by locals in the western city of Denizli sparked unrest that left four injured.

Several nongovernmental organizations held an event to mark the day at Sweden's Istanbul consulate to draw attention to the minority's problems. Levent Şensever, a spokesman for DurDe, an anti-racism platform, said the problems the community faced have been continuing for centuries. "We need to overcome the negative portrayal of Romanis in public. The media and lawmakers should help achieve this," he said.

Ufuk Demirbilek, a Romani citizen hailing from the western city of Manisa, spoke at the event about his legal battle against non-Romani locals in his village. Demirbilek said 22 houses belonging to the community were "demolished" when they were out to gather tobacco as field laborers in 2005. He claimed the villagers were hostile towards them though they have lived in the same village for generations.

Mümin Var, head of a Romani association in Aydın in western Turkey, said in a written statement that they have lived with others in peace for centuries and are "as equal as other citizens of Turkey" and sought equal rights and opposed being ignored.

To end prejudice towards Romanis and help improve their lives, the government announced an action plan a few years ago, which is expected to be implemented gradually. Since his tenure as prime minister, President Recep Tayyip Erdoğan has been known as a champion for Romani rights and often boasts of spending his youth in an Istanbul neighborhood home to a sizeable Roma population.

Under the plan, the government will provide vocational training for 5,000 Romanis initially to help their chances of employment. Municipalities will provide incentives for Romani craftsmen to open shops. Another step to help Romanis, for whom unemployment remains a major problem, is providing them with temporary employment at municipalities, schools and public institutions. Municipalities will also set up Romani Consultation Committees in cities where they live. The committees, which will be composed of local officials and representatives of the Romani community, will monitor the implementation of affirmative action measures for the community.

The government will also provide education opportunities for Romani children attending grade and high schools to boost their achievements through special training courses. Free courses for preparation to university entrance exams will be offered to disadvantaged Romani students.

Romani women attending vocational training courses will be offered free daycare for their children under the action plan. Security forces will also conduct an awareness campaign against the tarnished public image of Romanis who are often associated with crime.

The Ministry of Family and Social Policies has set aside a generous budget of TL 31.3 million ($12 million) for social support projects geared towards Turkey's Romani people for 2014-2016.

Romani people continue to remain a marginalized group in various countries throughout the world. They have faced and continue to face discrimination, persecution and alienation for their unique lifestyle and cultural practices. For instance, in Hungary Romani children are sent to the same schools as children with mental disabilities, while in the Czech Republic Romani women are forcibly sterilized. The European Commission yesterday called on European Union member countries to end discrimination against the Roma community.
Last Update: Apr 08, 2015 6:28 pm
RELATED TOPICS