Family of slain prosecutor seeks online ban of his images 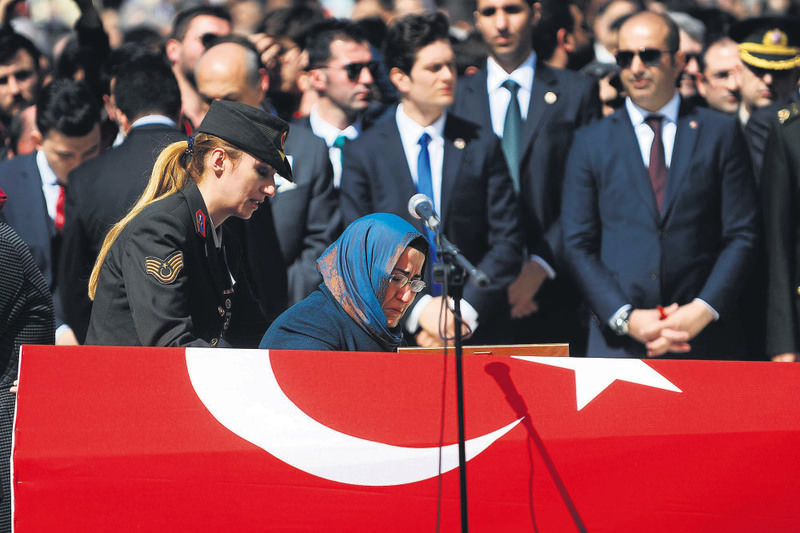 Yasemin Kiraz, wife of the late prosecutor, wailing beside the flag-draped coffin of her late husband at a funeral service in Istanbul.
by daily sabah Apr 10, 2015 12:00 am

The family of Mehmet Selim Kiraz, the prosecutor who was killed in an Istanbul courthouse attack by two terrorists from the DHKP-C last month, is seeking further action against Google and YouTube over a still accessible photo of Kiraz with a gun pointed at his head after last week's ban

A dramatic photo of Mehmet Selim Kiraz, the prosecutor killed in his Istanbul courthouse office in Istanbul on March 31, with a gun pointed at his head by terrorists from the Revolutionary People's Liberation Party-Front (DHKP-C) continues making waves in Turkey.

The image released by terrorists on social media websites drew public outrage. Media outlets using the photo in news articles were accused of exploiting the incident and spreading terrorist propaganda.

Kiraz's wife, Yasemin, and father, Hakkı, filed a complaint with the Chief Prosecutor's Office in Istanbul on Thursday for removal of the photo from websites. The family said in their complaint that the publication of the photo on websites affiliated with the terrorist organization was open propaganda for the terrorist group, and some websites still had not removed the image. "These images hurt us profoundly, as well as the Turkish public," they said. The complaint called the publication a crime, claiming it violats privacy, left children of the prosecutor traumatized and was propaganda for the DHKP-C. They pointed out that despite an Istanbul court imposing an access ban on sites publishing the images last week, which led to a temporary closure of Twitter and YouTube, the images were still accessible on YouTube and Google. Twitter had complied with the court's order to remove the content and resumed hours after the ban took effect. YouTube has become accessible as well after the website reportedly removed the image, but the family claimed otherwise.

The Kiraz family said in the complaint that YouTube and Google simply ignored the court order and the feelings of the family. They asked the legal authorities to impose a total ban on websites if they do not remove links to images of Kiraz.

Kiraz, who was investigating the involvement of police officers in the killing of a protestor, was taken hostage in the Çağlayan Courthouse on Istanbul's European side by two terrorists who snuck in posing as lawyers. After hours of negotiations, police stormed the office after the terrorists shot Kiraz, killing them.

Şafak Yayla and Bahtiyar Doğruyol, the two terrorists who took Kiraz hostage, had released a photo of the gagged prosecutor with a gun to his head against a wall plastered with DHKP-C flags and posters. The photo quickly circulated on social media, and some newspapers published the photo on their front pages. The image of a helpless prosecutor in the clutches of terrorists drew widespread condemnation. President Recep Tayyip Erdoğan and Prime Minister Ahmet Davutoğlu denounced the media over the use of the photo, and Davutoğlu ordered a coverage ban for those media outlets at the prosecutor's funeral.

Media outlets defended the action as press freedom and were quick to name last week's temporary ban a violation of that freedom.

Some newspapers also abstained from calling Yayla and Doğruyol terrorists and referred to them simply as "activists." In their tweets and blogs, several journalists even went on to defend the actions of the duo and blamed the police for the bloody conclusion of the hostage drama.

The Media Association, a nongovernmental organization concerning journalism, was among those criticizing the coverage. In a statement, it said the coverage served as propaganda for the terrorist organization. "The purpose of terrorism is to spread fear, hurt peace and sow the seeds of hatred among individuals. Propaganda is the most important tool for terrorists seeking to destroy democracy and people's faith in democracy. At a time of a terror attacks, media institutions should avoid being the raison d'etre for terrorism, be it consciously or unconsciously," the statement said.

Meanwhile, a lawyer filed complaints against 27 people, including politicians, journalists and artists, on charges of inciting hatred and inciting people to take up arms against the government following the incident. Rahmi Kurt said in his complaint filed on Thursday that the suspects "almost cheered the killing of the prosecutor" and tried to justify the killing and blamed it on the police raid to free the prosecutor.
Last Update: Apr 10, 2015 11:23 pm
RELATED TOPICS