Sudden change in weather poses risk to crops in Turkey 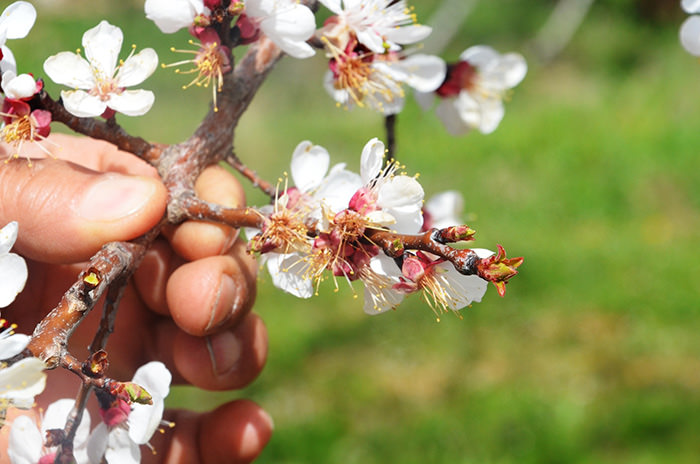 Turkey's western, central and northern regions have been gripped with an onslaught of snowfall and extremely low temperatures over the past few days. The unexpected cold patterns in April will likely hurt farmers due to frost.

In particular, the timing of the cold weather poses a danger for fruit growers as most fruits cultivated in the country are in the process of blooming.

Şemsi Bayraktar, head of the Union of Agricultural Chambers of Turkey (TZOB), warned farmers of severe frost that will continue throughout the weekend starting from Friday. Western cities from Kütahya to Eskişehir, Ankara and its neighbor, Kırıkkale, Muğla in the southwest and Bursa in the northwest are under threat of frost, according to weather forecasts. Bayraktar said in a written statement that the blooming season has already begun for almonds, apricots, plums and cherries and that the month of April is the time for the blossoming of other fruits as well, cautioning against widespread damage to fruit crops.

The government offers a delay of agricultural loan debts throughout the year for farmers whose crops are damaged from frost and other natural disasters, but it remains the sole option for farmers to recover their losses. Bayraktar has urged farmers to take measures against frost. Farmers often resort to burning hay in orchards or covering the area to minimize damage from frost. Bayraktar said they needed to adopt more modern techniques such as installing propellers to change the temperatures.

Snowfall in April surprised many in western Turkey, which normally enjoys relatively warmer weather in this month. The rare phenomenon naturally raises concerns of the effect of climate change. Turkey is already on alert against an onset of droughts in the near future, though off-season downpours and creation of artificial lakes across the country are relieving some concerns.

In an article on the issue, Professor İlkay Dellal from Ankara University's Faculty of Agriculture says the agriculture sector is particularly vulnerable to climate change and that Turkey, with its location, is among the countries that will be most affected by the phenomenon. She points out that the rise in temperatures, a change in precipitation patterns and shift in seasons are the potential effects of climate change and urges measures especially by decreasing greenhouse emissions stemming from agricultural activities and raising awareness among farmers on climate change.