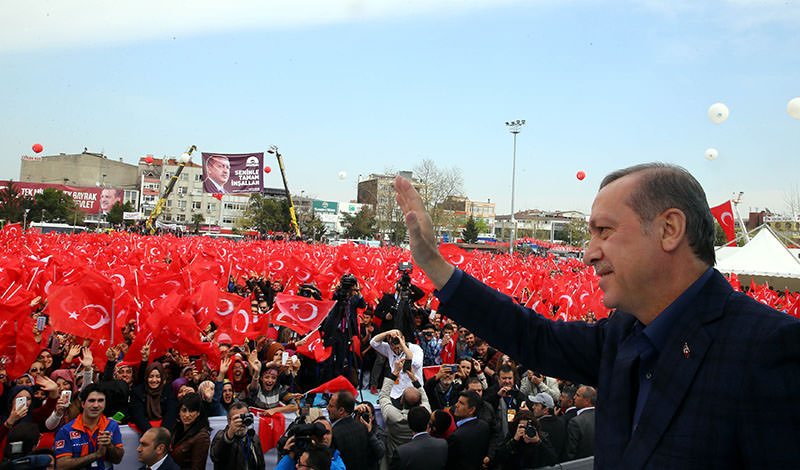 | AA Photo
by Daily Sabah with AA Apr 11, 2015 12:00 am
Four Turkish troops have been wounded after a group of terrorists opened fire with rifles on soldiers in the eastern province of Ağrı, Turkish security sources have said.

Turkish President Recep Tayyip Erdoğan said on Saturday that the clashes were ongoing between the Turkish troops and 25 terrorists.

He said: "I strongly condemn this attack on our security forces who work selflessly to ensure the security of our people."

"The attack aims to shatter the environment of peace in the country, and to sabotage the reconciliation process," he said, referring to the government initiative launched in early 2013 to settle the Kurdish issue and secure an end to the decades-old conflict with the outlawed Kurdistan Workers' Party, or the PKK which has so far claimed the lives of more than 40,000 people.

He also warned a political party, without giving names, against using arms to get votes in the upcoming June 7 elections.

"This party is trying to procure votes through the activities of this terrorist organization. The way to democracy and fundamental rights and freedoms is not through weapons; it is through the ballot box," he said.

Davutoğlu said that he had been in contact with the Chief of Staff and Interior Ministry authorities.

"Have no doubt. The security of the elections, where our people will vote with their free will, will surely be provided," Davutoğlu said.

The pro-Kurdish People's Democratic Party (HDP) co-chairman Selahattain Demirtaş also commented on the incident, saying it was "upsetting" and "worrisome" and it had to be investigated further. He said, if Turkey is embracing the reconciliation process, it is because the arms should be silenced, no one should die, and get injured.

Deputy Prime Minister Yalçın Akdoğan condemned what he said was a "terrorist attack on our security forces who try their best to ensure the peace and security of our people in Agrı".

"It is unacceptable to use pressure, violence and arms for political competition, and to place a lien on public will," he said on Twitter, calling for an end to "partisanship supported by terrorist organizations" and warning against "terrorizing politics".

The Turkish Interior Ministry also released a statement saying "the attack during the deployment of troops to the region justifies our sensitivity regarding public order, and the necessity for the measures taken".

"All institutions of our government are determined to take and implement all necessary measures in the face of such incidents which undermine public order and jeopardize the security of our citizens," it said.

Turkish troops retaliated against the attack, leading to an exchange of fire around the village of Yukarıtütek in the district of Diyadin, the Turkish General Staff said in a statement Saturday.

"Upon a tip that a terrorist organization planned a 'Spring Fest' event on Saturday and Sunday in the area with the purpose of propaganda, and in order to pressure locals to vote for certain nominees in the upcoming June 7 elections, a total of 15 military teams from the Ağrı Provincial Gendarmerie were dispatched to the area over Friday night in order to secure the area and establish public order upon the order of Ağrı governor," the statement read.

Manned reconnaissance planes, attack helicopters and commandos were deployed to the area, and the clashes were ongoing, it added.