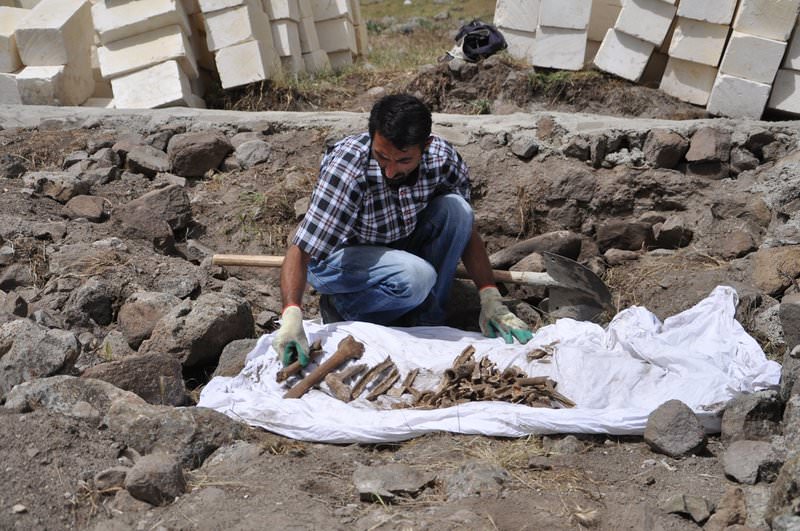 Excavation in the site where 24 people from the Baran and Canan families were claimed to be burned to death in the 1938 airstrike in Dersim (IHA Photo)
by daily sabah Apr 14, 2015 12:00 am
A court's order to unearth a mass grave linked to the infamous Dersim massacre in the 1930s in present-day Tunceli in eastern Turkey is expected to shed new light on the atrocities committed by the state.

A legal battle by descendants of two families slaughtered in the Dersim massacre has come to a groundbreaking conclusion. A court in the eastern Turkish city of Tunceli - as Dersim is now known - ordered a site where a mass grave is likely located, to be excavated to search for the remains of 24 people.

A taboo subject for decades, the massacre took place as part of a military operation to crush a rebellion in the early years of the Republic, according to the official account.

Furthermore, lawsuits to hold the state responsible for the massacre were dismissed due to the statute of limitations.

The Baran and Canan families from Karabakır village in Tunceli's Hozat district had claimed their 24 relatives were burned to death during the military operation. The families decided to erect a monument in their memory in the area where they were presumably killed. During the excavation for the monument's construction, they found a large number of bones. They applied to a prosecutor's office, demanding an investigation. The prosecutor ruled out a probe, citing the statute of limitations and the lack of authorization to carry out an investigation, as a court order was required. The families took the case to court and the court recently ordered the excavation of the site for a possible mass grave and identification of bones after a lengthy legal battle.

A delegation of forensics experts started excavation on Tuesday in the first such attempt to unearth remains of people killed in the massacre. Families hope that the excavation will lead to the discovery of remains and prove that the massacre did indeed take place.

The Dersim Massacre is described as one of the most tragic incidents of the Turkish Republic when ethnic minority groups consisting of Alevi Kurds and Zazas in the southeastern region of Dersim revolted against Turkey's Resettlement Law of 1934 imposed by the Republican People's Party (CHP), the only political party at the time. The law forced the relocation of people to pursue cultural homogeneity and to exert the newly established state's authority in the region. People, including civilians, faced military intervention, including airstrikes, resulting in the mass killing of over 10,000 between 1936 and 1939. Sabiha Gökçen, one of Mustafa Kemal Atatürk's adopted daughters and the world's first female combat pilot participated in the airstrikes, and revealed afterwards that they were given the order to strike everything that was alive, including animals.

While the CHP has not claimed responsibility for the incident, President Recep Tayyip Erdoğan, apologized on behalf of the Turkish state in 2011, when he was Prime Minister, and harshly criticized the CHP for disregarding the incident. At a party meeting in which he expressed the apology, Erdoğan was shown official documents dating back to 1938 and 1939 that confirmed the casualties in the military crackdown and forced deportation of over 11,000 people.

Prime Minister Ahmet Davutoğlu has recently claimed that opposition leader Kemal Kılıçdaroğlu was hesitant to make remarks about Dersim as he is scared about the reaction of neo-nationalists within the CHP who claim the party cannot be held responsible for the incident. The opposition party draws support from several Alevi groups and its current leader hails from Tunceli. A CHP lawmaker had apologized last year on behalf of the party though he faced opposition from other lawmakers, complaining the apology was not issued with unanimous approval of party members.
Last Update: Apr 14, 2015 4:58 pm
RELATED TOPICS