Program helping Syrian children reaches out to 75,000 in Turkey 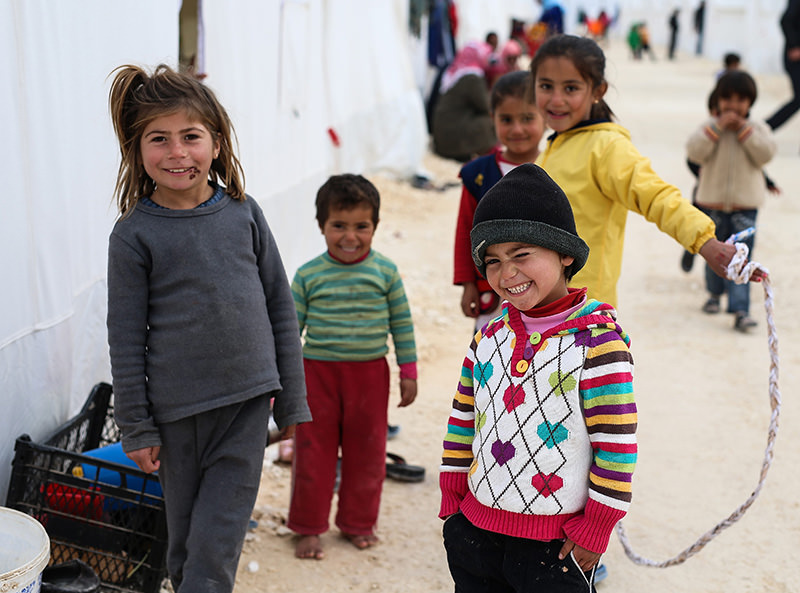 Syrian refugee children, who fled violence in Syria, seen outside their tent in Turkeyu2019s newly set-up camp in the border town of Suruc, on Jan. 30, 2015 (AP Photo)
by daily sabah Apr 15, 2015 12:00 am
A joint project by the Turkish Red Crescent, the Prime Ministry's Disaster and Emergency Management Authority (AFAD), the Ministry of National Education, UNICEF and the European Union concluded on Wednesday with a ceremony held in the Turkish capital of Ankara.

The Increasing Resilience of Syrian Children Under Temporary Protection in Turkey project, which started in 2013, reached out to 75,000 children according to official figures from UNICEF.

Throughout the course of the project, child-friendly spaces were set up in refugee camps, along with education centers and libraries to help children forced to drop out of school due to the war to resume their studies. The project also provided psychosocial support to children. Teenagers also benefited by attending leadership training and financial incentives for Syrian teachers were provided.

"The project is a good example of solidarity and commitment to support Turkey with funding from the European Union and implementation by UNICEF. It is also a demonstration that the conditions of refugees can be improved through common will and joint efforts, and therefore is both an incentive and an encouragement to continue and broaden our cooperation," Bela Szombati, chargé d'affaires of the Delegation of the European Union to Turkey said at the ceremony.

"The assistance that has been provided under this project is vital to prevent the loss of a generation of Syrian children. It is crucial to continue investing in their future by giving them opportunities to access a quality education, to learn in a safe environment and receive psychosocial support," UNICEF representative in Turkey Philippe Duamelle said.

Increasing Resilience of Syrian Children under Temporary Protection in Turkey

Turkey is home to over 1.7 million displaced Syrians, and about 300,000 of them reside in camps located in border cities. The children are estimated to make up half of the Syrian population in Turkey.

To ensure a better future for Syrian children, Turkey offers education in refugee camps, but a large number of Syrian children living outside the camps and in an impoverished state, lack education opportunities although local and international charities mobilize to provide education through private schools.

The country, which has spent over $5 billion for Syrian refugees since 2011, is the primary host for Syrians displaced by four years of civil war. It has provided Syrian citizens with tent camps and state-of-the-art "container cities," which have been praised by the international community for their exemplary conditions. Yet, the government has struggled to look after others who are unable or unwilling to stay in the crowded camps with limited resources and little aid from other countries. While those with a relatively good income start new lives in cities by setting up businesses and buying or renting apartments, most Syrians displaced by the conflict are from low-income families. They live in squalid conditions in abandoned buildings and parks while working long hours in low-paying jobs without any form of social security.

Authorities acknowledge that the growing number of Syrians and lack of a solution to the conflict in Syria is a heavier burden to the country than previously thought.

Ankara is often critical of the international community for its failure to provide funds for humanitarian aid to the refugees.
Last Update: Apr 15, 2015 6:07 pm
RELATED TOPICS