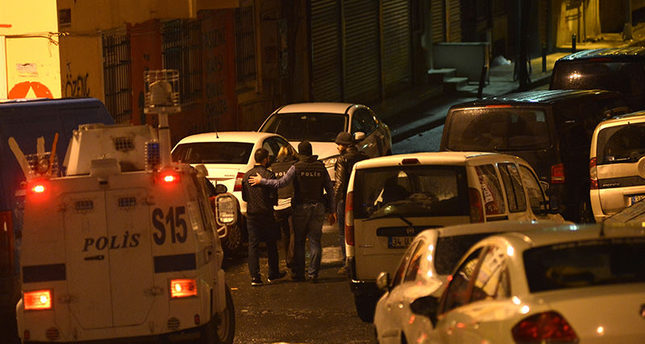 by Daily Sabah with AA Apr 16, 2015 12:00 am
Documents seized during the arrest of two members of Revolutionary People's Liberation Party-Front (DHKP-C) revealed that the terrorist group had been planning to carry out an attack on some Turkish deputies, members of Turkish Industry and Business Association (TÜSİAD), police departments, military units and the buildings of the National Intelligence Agency (MİT).

The seized files detailed a plan intended to garner extensive coverage form Turkish and international media. According to the evidence found, the plan was for militants disguised as Turkish officers to penetrate police stations, in vehicles transformed into police cars, and detonate bombs.

The documents also show that leaders of the illegal far-leftist organization had forbidden its members of making phone calls. They had also encouraged them to join different political organizations in order to better mask their intentions.

DHKP-C, designated a terrorist organization by Turkey, the U.S. and the EU, was behind the suicide bombing of the U.S. embassy in Ankara two years ago that killed a Turkish security guard.

The terrorist organization last hit the headlines with the killing of a prosecutor at a courthouse in Istanbul and a foiled suicide bombing attempt at headquarters of Turkish National Police in Istanbul last month.

Following the murder of prosecutor Mehmet Selim Kiraz by two terrorists who held him hostage for hours in his courthouse room, Turkish police launched operations against DHKP-C members across the country. Dozens of suspects were detained in Istanbul and other cities. A cache of pistols and shotguns were seized in the raids in Istanbul's various districts.

The terrorist organization pursues an anti-American, far-left ideology, and apart from the embassy bombing, it has targeted U.S. and NATO facilities, as well as diplomatic missions in a series of attacks in the 1990s. During the Gulf War in 1991, the organization claimed responsibility for the killing of two U.S. soldiers in Turkey.

Founded in 1994, the DHKP-C is responsible for a string of attacks targeting Turkish security forces and American elements in Turkey. Splintered from a radical armed faction that was behind a series of high-profile assassinations, DHKP-C has stepped up its attacks in recent years.

Prior to the courthouse shooting, the DHKP-C had claimed responsibility for attacks on police in Istanbul earlier this year.