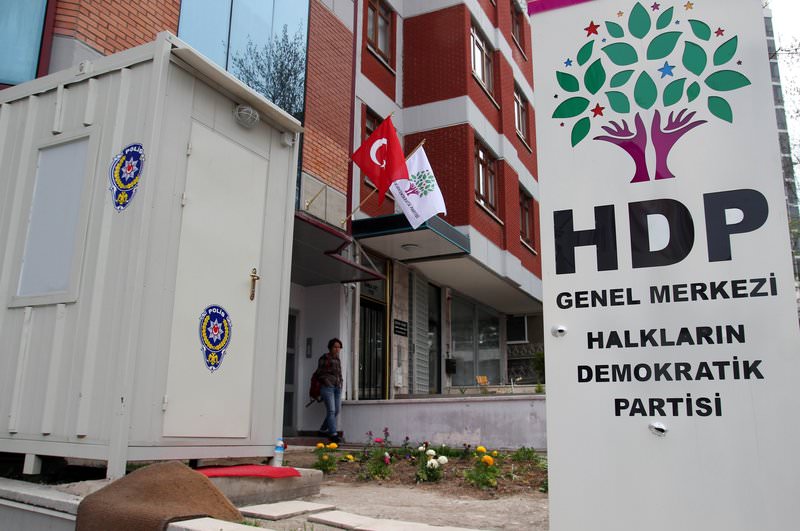 | AFP Photo
by daily sabah Apr 18, 2015 12:00 am
Gunshots were been fired at the pro-Kurdish Peoples's Democratic Party (HDP) headquarters located in Çankaya district of Ankara on early Saturday, leaving bullet holes on the signboard and the walls.

Sırrı Süreyya Önder, HDP Deputy and candidate from Ankara for June 7 parliamentary elections, criticized the attack and dubbed it as provocation.

Önder also criticized the police as the CSI team arrived at the scene in the morning, although the attack took place just after midnight.

HDP officials constantly issue warnings regarding provocative actions against the party and their voter base.

Central Executive Board of HDP made a written statement regarding the gun attack:

"Gunshots fired from a passing vehicle damaged our party headquarters and the flags in front of the building towards morning on Saturday. Fortunately, the party employee who was in night duty at that time and police officers in security cabin were not injured" the statement said.

The party also said in the statement that they will never allow provocative actions to ruin their 'freedom, democracy and justice struggle' and they expect that the government will catch the perpetrators as soon as possible.

Prime Minister Davutoğlu condemned the attack, writing on his Twitter account, "I condemn the attack perpetrated against HDP. We are doing our best to capture those who are responsible."

"It is clear that this attack, like any other previous attacks, targets our democracy and stability. I call on all the parties to take a common attitude against violence (...) anywhere in Turkey," he said.

Deputy Prime Minister Yalçın Akdoğan also said the government will always condemn such attacks regardless the source and its aims.

One of the two suspects has been arrested on charge of causing panic among public, while the other has been released on the condition of judicial control on Sunday.
Last Update: Apr 19, 2015 5:59 pm
RELATED TOPICS