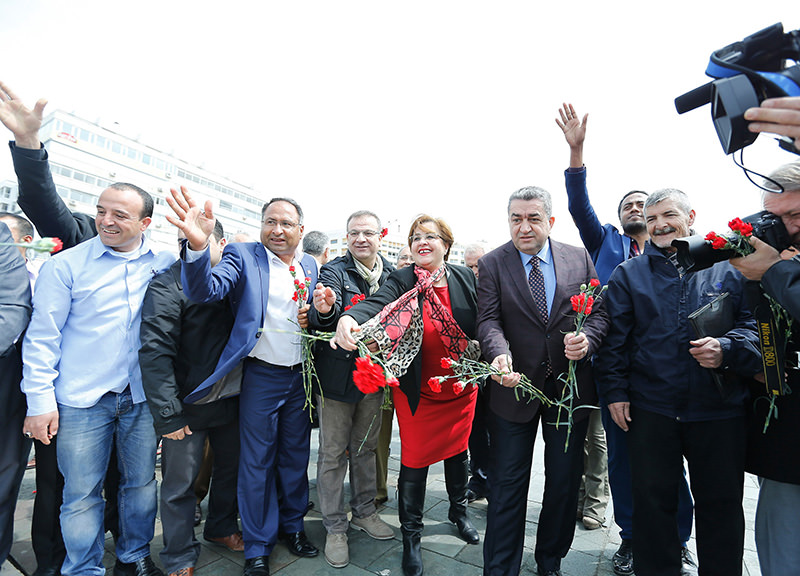 Romanis celebrate International Romani Day in the western Turkish city of u0130zmir, on April 8, 2015 (u0130HA Photo)
by Tarık Işık Apr 20, 2015 12:00 am
Turkey's underprivileged Roma community is seeing more affirmative action under the current government after decades of negligence by the past governments.

At a meeting with representatives of the Roma community on Sunday, Prime Minister Ahmet Davutoğlu announced that the Prime Ministry would establish "a mechanism" to help Roma citizens against discrimination and the problems they face.

It was revealed that the mechanism will be an office under the Prime Ministry exclusively for Roma citizens and will be complemented with a hotline designated for the community's members to speak about their problems.

The new unit will be similar to the Prime Ministry's Information Center (BİMER) where every Turkish national can file a complaint about any issue from human rights violations to noisy neighbors. However, it will only look into complaints lodged by Roma citizens. The unit will be headed by a Roma adviser that Davutoğlu announced during his address at Sunday's event.

Through the free hotline and e-mail, Roma citizens will be able to file complaints and requests directly to the Prime Ministry. The unit is also expected to be as effective as BİMER, which led to investigations into complaints by citizens on issues that were sometimes overlooked by lower authorities.

Apart from personal complaints, the unit will look into complaints voiced through news articles in media outlets.

Turkey's Roma citizens have complained of veiled discrimination, as is the case in other countries, for decades, and the lack of any social policies to help improve their status further cast them away from society. Low levels of education and alleged blacklisting in terms of employment are among the major problems they face.

Davutoğlu vowed on Sunday to tackle the discrimination and prejudice towards the Roma community through the abovementioned "mechanism."

To end prejudice towards the Romanis and help improve their lives, the government announced an action plan a few years ago, which is expected to be implemented gradually. Under the plan, the government will provide vocational training for 5,000 Roma initially to help improve their chances of employment. Municipalities will provide incentives for Romani craftsmen to open shops. Another step to help the Romanis, for whom unemployment remains a major problem, is providing them with temporary employment at municipalities, schools and public institutions. Municipalities will also set up Romani consultation committees in cities where they live. The committees, which will be composed of local officials and representatives of the Roma community, will monitor the implementation of affirmative action measures for the community.