Turkey now the largest of host of refugees: UNDP 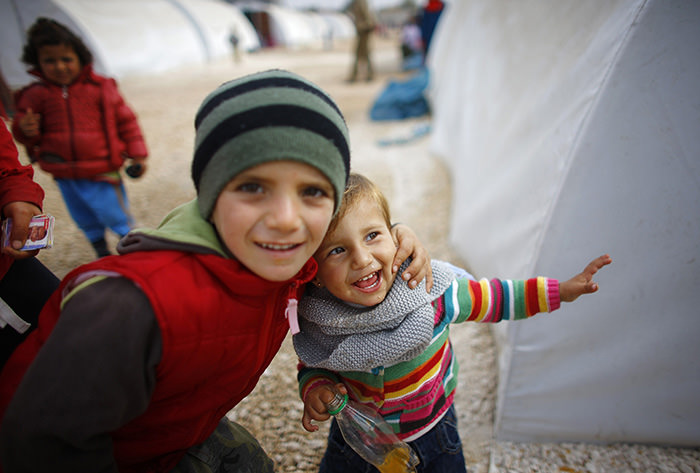 Refugee children, who are from the Syrian town of Kobani, smile as they play in a refugee camp in the border town of Suruu00e7, u015eanlu0131urfa province November 20, 2014 (Reuters Photo)
by Dogan News Agency Apr 27, 2015 12:00 am
The humanitarian crisis in Turkey's southern neighborhood has pushed over 2 million people, mostly from Syria, to relocate from their home countries to Turkey, but "we haven't seen the worst," said Helen Clark, the head of the United Nations Development Programme (UNDP), outlining her expectation that more people will choose Turkey as a safe haven.

Impressed by a major Turkish refugee camp in Gaziantep by the Syrian border ("the best in the world" she says), Clark underlined that Syria was now the biggest crisis in the world and "getting worse."

She said it was likely that more than 800,000 people might flee Syria in 2015 and that the toll in Turkey might hit an alarming 2.5 million, together with refugees from Iraq.

"Turkey is now the largest host of refugees anywhere in the world" and making an "incredible contribution" to Syrian refugees at its own expense, Clark says. "This is the best practice in the world."

She thinks developed countries should assist poor ones more in order to eliminate the "root causes" of migration from conflict and poverty zones. As one of the possible candidates to become U.N. secretary-general after Ban Ki-moon, Clark was questioning the U.N. system for being "stuck in the 1940s" and encouraged it to rethink the veto system to overcome the crisis.

The UNDP regional office in Istanbul was launched due to Turkey's "strategic and logistical position" to run the Eastern European, Russian and Central Asian activities of the UNDP in addition to other hubs in Amman, Addis Ababa, Bangkok and Panama City, she said.

Here are some highlights from an interview with UNDP head (and former New Zealand Prime Minister) Helen Clark:

People are trying to send some young family members to find a foothold in Europe and a bit of new life. Europe needs to be giving very serious thought to some new compact with the least developed countries of Sub-Saharan Africa, which enables them to offer their people a future. In Europe at the moment, as we notice, there is quite high unemployment. So it is not the pull factor there was. But the push factors are extreme.

Syria is in fact so greatly on top of that. There are an estimated 1.7 million people from Syria here, plus 300,000 Iraqis. Turkey is now the largest host of refugees anywhere in the world. It is huge. It has hosted these people at its own expense. Six billion dollars, Turkey says, has been spent. Some 300 million dollars [has come] from the international community.

Turkey has not seen much international support. Turkey has the Islamic State [of Iraq and the Levant – ISIL] on its border, controlling border passes. This is very alarming for Turkey; for all of us. The UNHCR is forecasting an extra 804,000 refugees this year. Not all [will go] to Turkey [some will go to Jordan and Lebanon as well], but it is predicted that by the end of this year, Turkey will be hosting 2.5 million refugees.

I am really conscious that Turkey is making an incredible contribution to the response to the Syrian [crisis]. Within Syria there are 7.5 million internally displaced people. Imagine if those 7.5 million want to come to Turkey to Lebanon, to Jordan, to Iraq, to Egypt to Europe... This is a shocking crisis and it needs a political solution, hopefully based on the Geneva agreements we reached several years ago. It is very elusive.

THE BEST CAMPS IN THE WORLD:

I visited a tent camp and a container camp near Gaziantep on [April 22). I have to say that these are the best refugee camps in the world. I think Turkey has put in a tremendous amount of effort and thought into these camps. I saw children in preschools. I know other children going to school in these camps, I saw the shops for the food, and Turkey is largely providing the budgets on credit card for food.

It is providing basic services. It is doing everything but it is doing it on its own, and it is extremely expensive. And there is another thing that Turkey has done which is best practice… This new law on foreign protection and temporary protection regulations which Turkey has passed will enable people to legally work and define sectors of the economy.

THE RICH SHOULD GIVE MORE:

We are concerned that official development support for poor countries is in decline. The number this year is basically the same as last year: 135.2 billion … Because of these extreme humanitarian emergencies, money out of them is being diverted to these catastrophes and away from the poor but relatively stable. And it is out of these countries that we have also seen a very significant migrant flow.

WHY WE HAVEN'T SEEN THE WORST YET?

The multilateral system in general which is the U.N. and the international financial institutions are somewhat stuck in the 1940s. I think the [U.N. Security Council] veto is a problem; a problem of five members, so it would be a problem of 10 or 15 permanent members.

A two-thirds majority [is required] to do certain things which might be a mandated force. So, we are the people who are stuck with trying to pick up the pieces, so we would also like to see a bit of a functioning Security Council. No one wants to leave their right to a veto, but we have to have new permanent members. How can we explain to Indians [that they have no place there], to Germany, Brazil, Japan, Turkey, of course – we have major emerging countries.

There is an old saying: adapt or die. And my observation is that with a combination of this, blocking people out of political systems, [having] people feeling marginalized, not included, not having a voice … you have all the ingredients for very bitter, nasty and protracted contracts. And we haven't seen the end of it.
Last Update: Apr 27, 2015 12:38 pm
RELATED TOPICS