Turkey's AFAD and other aid organizations on ground in Nepal 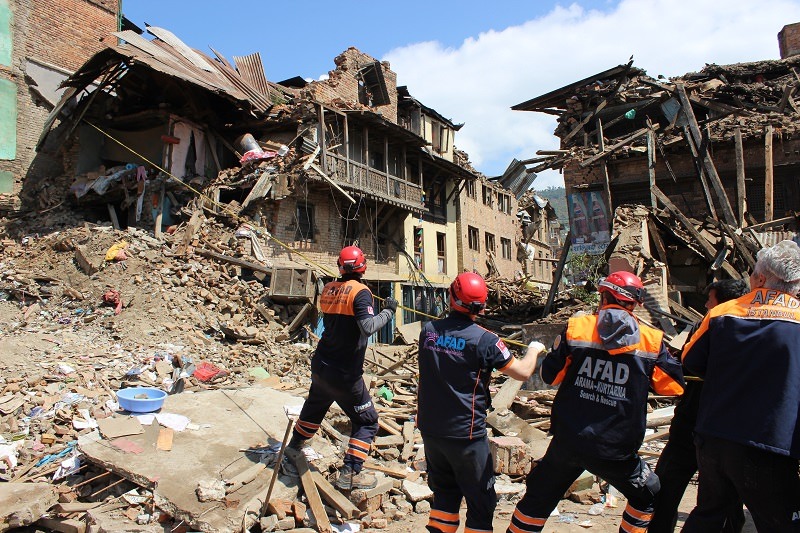 by Anadolu Agency Apr 27, 2015 12:00 am
Turkey has responded to the Nepalese earthquake by sending at least five teams of experts to the devastated Himalayan nation.

On Monday, a team from the Prime Ministry Disaster and Emergency Management, known by the Turkish acronym AFAD, pulled a male survivor from rubble while working to the west of capital Kathmandu.

"A Nepalese man was taken out alive," AFAD said in a statement released on Monday. "Three bodies were found in Pukhulachhi, located west of Kathmandu, during rescue work in the region."

The 26-strong AFAD team is part of the Turkish relief effort that arrived in Nepal on Sunday, a day after the country was hit by a 7.8-magnitude earthquake that has claimed nearly 4,000 lives, including dozens in neighboring India and Tibet.

Around 7,200 have been saved by an international relief effort that swung into action soon after the quake struck 80 kilometers west of Kathmandu.

The Turkish Red Crescent sent blankets, tents and six tonnes of food, flown in by Turkish Airlines, from Pakistan and Bangladesh, while the National Medical Rescue Organization, known by its Turkish acronym UMKE, has sent 10 highly trained staff.

At least 74 experts from Turkish organizations are currently working in Nepal.

Izber Barin, who was visiting Nepal with his wife, said: "The situation in Nepal is very critical."