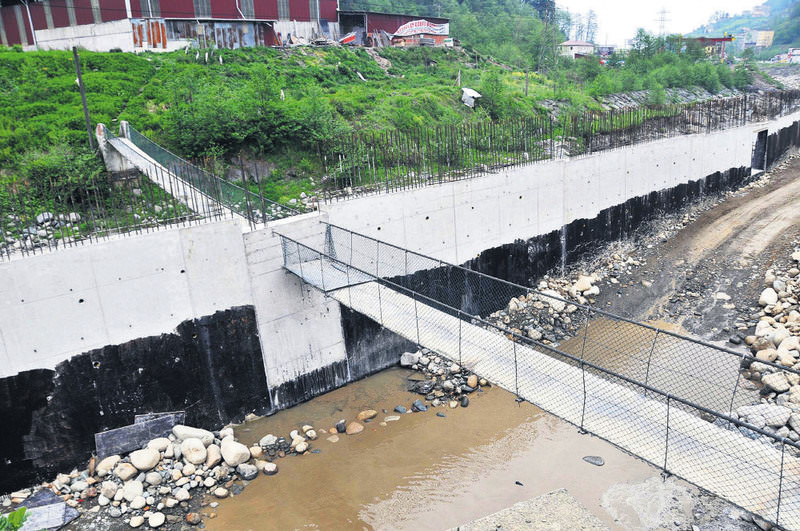 by Daily Sabah with Wires May 03, 2015 12:00 am
A wall erected in the middle of a suspension bridge is the latest architectural oddity in Turkey's Black Sea Region, which is home to such peculiarities.

The wall is actually part of a retaining wall on the side of an expanded road in the province of Rize, but pedestrians are still baffled why the road authority decided to construct it anyway without demolishing the 58-meter-long bridge.

The bridge on the stream divides Akarsu and Hamzabey, two villages between central Rize and the town of Güneysu, the hometown of President Recep Tayyip Erdoğan's parents. Bayram Dinç, the head of Akarsu village told Anadolu Agency he warned the road authority about the bridge when the road was still under construction. "They didn't respond and then they divided the bridge. We don't oppose the construction of a road here but this is really odd," he said. Dinç suggested that they build a concrete bridge after removing the existing one. Meanwhile, villagers leap over the wall to get to the other side while the elderly are provided assistance to climb the wall. Authorities plan to remove the part of the bridge on the side of the road after construction is completed.

Rize is no stranger to the ingenious ideas the locals produce to overcome geographical and other challenges in a place where slopes are abound. Among them is a 165-step staircase cutting through eight floors to reach the entrance of a double-story house built on the edge of a cliff. The same builder placed a wooden bridge connecting two seven-story apartment buildings when he realized there was not enough space to build a fire escape for the two buildings.
Last Update: May 03, 2015 11:26 pm
RELATED TOPICS