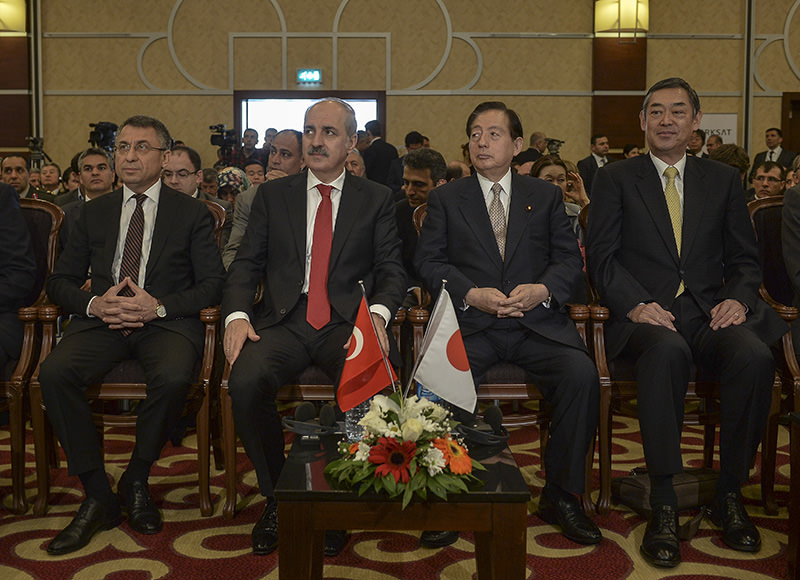 | AA Photo
by Daily Sabah May 04, 2015 12:00 am
Turkey and Japan, two countries sitting on fault lines and prone to earthquakes, are seeking joint cooperation in disaster response and management. The third edition of a workshop on disaster management was held in the Turkish capital Ankara on Monday. Deputy Prime Minister Numan Kurtulmuş and Japanese minister of Land, Infrastructure, Transport and Tourism (MLIT), Akihiro Ohta, attended the workshop along with experts from the Prime Ministry's Disaster and Emergency Management Authority (AFAD), Japan's MLIT and representatives from Turkish and Japanese companies specializing in disaster management. Turkey and Japan had signed a declaration of goodwill in 2014 for disaster management cooperation to share their experience and know-how on the subject, including the use of communications technologies, evacuation plans and damage assessments in the aftermath of disasters.

The deputy prime minister stressed that the Turkish public immediately responded to the 2011 earthquake and tsunami in Japan. "People scrambled to send any kind of assistance to Japan. AFAD and other agencies were immediately deployed to Japan and offered support," he said. Kurtulmuş also reiterated the assistance offered by Japanese rescue teams in the eastern Turkish province of Van in 2011 in the aftermath of an earthquake that killed hundreds, as well as commemorated Atsushi Miyazaki, a Japanese aid volunteer who died when a building collapsed in an aftershock in Van.

Ohta said Japan and Turkey have strengthened their political and economic relations in recent years. "The peoples of both countries have helped each other at times of disasters. We will always remember the efforts of Turkish rescue crews for three weeks after the 2011 earthquake in Japan," Ohta said. The minister added that he believed the workshop would further bolster their cooperation in disaster management.
Last Update: May 04, 2015 6:29 pm
RELATED TOPICS