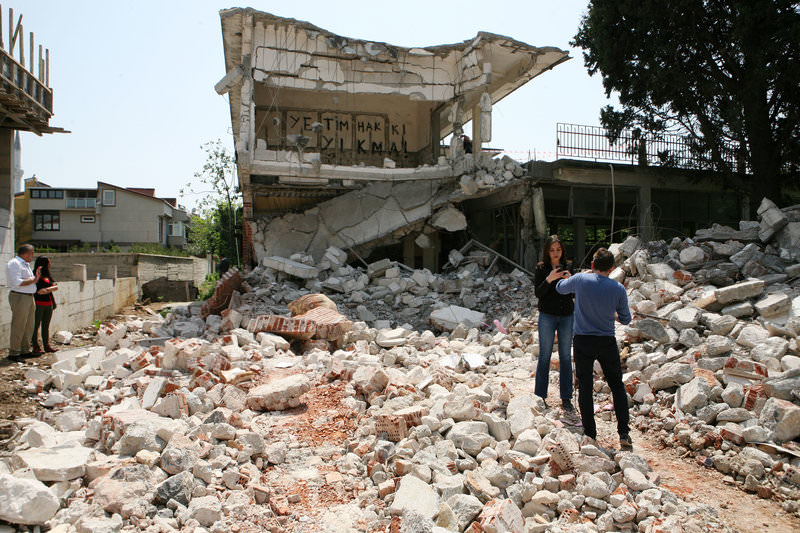 by Daily Sabah May 07, 2015 12:00 am
Demolition of a historic orphanage for Armenian children in Istanbul's Tuzla district led to outcry and protest by a group of activists who managed to block the bulldozers on Tuesday.

The orphanage building, which has long been abandoned, was purchased by a local businessman determined to demolish it to build housing units in the vast area of the property.

Upon hearing of the demolition attempt, activists flocked to the orphanage, Kamp Armen. They confronted workers and bulldozers descending on the site and the demolition was postponed to a later date while the group stayed at the building yesterday to prevent any further attempts.

Arno Kalaycı, a Turkish-Armenian activist, said the land where the orphanage, known as the Tuzla Armenian Children's Camp, was bought by the foundation of the Armenian Protestant Church in 1962 and the orphanage was built to house Armenian orphans arriving in Istanbul from various cities in Anatolia.

"In 1974, the Turkish Supreme Court of Appeals ruled that the foundations set up by those who are not Turkish, cannot acquire properties, citing a 1936 regulation. It clearly meant the foundations of minorities – Armenians, Greeks et cetera. The title deed was canceled in 1979 and the land was returned to its former owner. It was then resold many times. Today, the new owner decided to demolish it and build a villa," he said.

Kalaycı said the orphanage was a place where more than 1,500 Armenian children were educated and resided. "This is a place where they spent their childhood and we do not want their childhood memories to disappear. We want these memories to be respected. This place was illegally taken from a community and we want it to once again host a camp," he told reporters. Amid the orphans raised in the historic building was the late Hrant Dink, editor-in-chief of Agos daily and a renowned figure from the Turkish-Armenian community who was assassinated in 2007. His wife Rakel Dink also spent time there.

Abdullah Fatih Atasoy, the current owner of the land where the orphanage is located, said in a written statement that the building was crumbling and under risk of collapse. He claimed it was inhabited by squatters using the site for "immoral acts." Atasoy said it was his own property and demolishing or keeping it is at his own expense. "I don't want to hurt the feelings of a community. I already offered the Armenian community to buy it if they want. I can still sell it to the Armenian community," he said.

Since 2011, in the wake of a landmark government decree paving the way for the return of properties seized from non-Muslim minorities, several historic buildings in Istanbul and other cities were returned to minority communities, including Armenians. Minority community foundations are granted the return of properties forcibly confiscated by the state in the past under discriminatory policies through lawsuits.
Last Update: May 07, 2015 6:56 pm
RELATED TOPICS