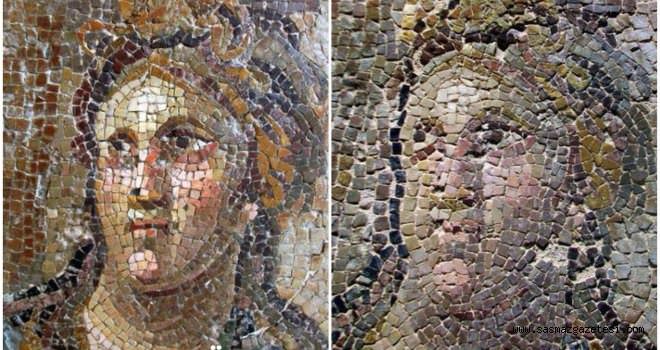 by Daily Sabah May 07, 2015 12:00 am
The Ministry of Culture and Tourism released a statement in response to allegations that restoration of ancient mosaics in a museum heavily distorted the originals. The mosaics were also shown to journalists on Wednesday to prove that they were not distorted.

The restoration work has become a laughing stock after a local newspaper in the southern city of Hatay, where the archaeological museum is located, published before and after photos of the mosaics. A local mosaic expert who took the photos before and after their restoration had told the daily the mosaics depicting Egyptian goddess Isis, who was also known in the Roman Empire, and several mythological figures dating back to Roman times had missing pieces.

The ministry had initially told the media that an investigation was underway into the restoration, two days after the news made it to national media and almost one month after they were published by the local media.

Following fierce criticism and mockery of the mosaic restoration work on social media, the ministry released another statement and invited journalists to see the state of the mosaics. Reportedly, the mosaics resemble their authentic state. The ministry claimed in a statement that some images of the mosaics published in the media were "altered" while others were taken in an early stage of restoration.