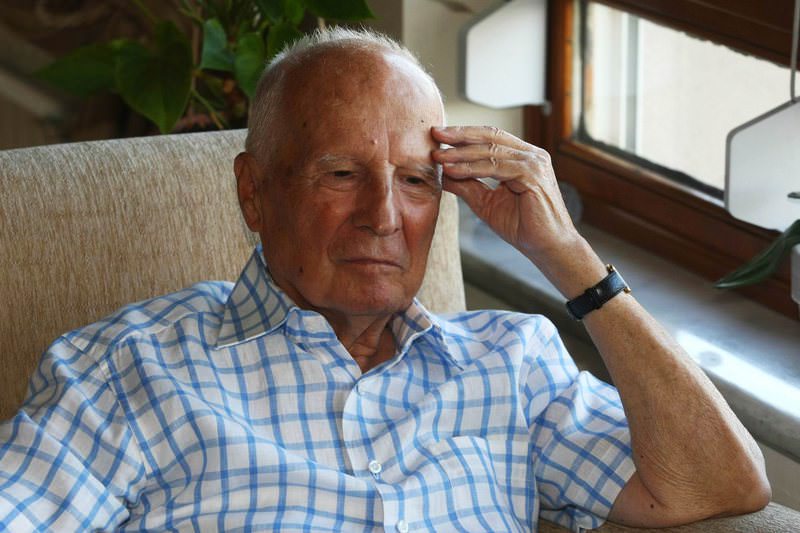 Kenan Evren, who led the 1980 coup that resulted in gross human rights abuses and is seen by many as the source of numerous current ills that beset the country, died on Saturday. Although efforts to exorcise his influence, his toxic legacy remains

Kenan Evren, the leader of the 1980 coup, died late on Saturday at the military hospital GATA in Ankara from multiple organ failures linked to old age. Evren, who was 97, had been undergoing treatment for chronic back pain since March 2012 at the hospital.
Evren was born in Manisa in 1917 and graduated from the military academy in 1949. After serving as the land forces commander, he was promoted to chief of general staff in 1978.

He is principally known for leading the Sept. 12, 1980 military coup. With the coup he assumed presidency and the head of the National Security Council (MGK) along with being the head of the military. The era that began with the coup is known for gross human rights violations, suspension of the political process and tens of thousands being detained and tortured. Several prisons, including one in Diyarbakır, became infamous for the systematic torture of inmates. Diyarbakır Prison is seen by many as the place where the terrorist PKK was born.

The military regime he headed also introduced the most resistant constitution of the Republican era, which is still largely in effect despite repeated efforts to reform it. The referendum that inaugurated the 1982 Constitution also installed him as president, a position he maintained until 1989. The military's political interventions since then were justified by the Constitution, which gave the military ultimate arbitrational power.

Last year, Evren, alongside the only other surviving member of the 1980 coup, former Air Forces Commander Gen. Tahsin Şahinkaya, was convicted of crimes against the state and sentenced to life imprisonment. They were the first generals to be tried and convicted of leading a coup in Turkey. The court decision stripped him of his military title and demoted him to the rank of private. The court's decision was yet to come into effect when he died because of an appeal lodged by his lawyers. His trial was made possible after the 2010 referendum that introduced several changes to the Constitution. Evren can be buried with a state funeral because he is a former president, but the decision is largely a political one.
After the coup, Evren dissolved Parliament and detained all prominent politicians in a regime of coercion that lasted several years. Some 1.6 million people were blacklisted, 650,000 detained and 230,000 were tried in courts. Fifty people, some juveniles, and most political prisoners, were executed while 300 people died in prisons, mostly from torture.

Evren always maintained that torture was not sanctioned by the military, although it was not clear what, if anything, he did to address it. Some 49 people were executed, including 17-year-old Erdal Eren, whose hanging for allegedly killing a soldier horrified the public. Evren was unapologetic.

"So, after I catch them and send them to trial, I will not execute them, but look after them for the rest of their lives? I will feed this traitor who kills a soldier that gives his life for the land? Would you accept that?" Evren said in 1984. Turkey abolished the death penalty in 2000 as part of reforms to join the European Union.
Evren's five-member military council ruled until November 1983 when the generals handed back power to civilians. Still, the military remained the real powerbroker behind the government. Evren quit the military but remained in power after ensuring that he was elected president for seven years in a 1982 referendum. The same referendum also approved a new constitution that restricted labor unions and freedom of association, put universities under strict state control and muzzled freedom of expression.

The ruling Justice and Development Party (AK Party) has been campaigning to change the current Constitution and replace it with a more democratic one for years. The opposition, mainly the secularist fringe, has been largely resisting change. Introducing a new constitution is a main election pledge of the AK Party leading up to the June 7 parliamentary elections.

It gave the military political influence through the MGK, a forum of generals and top political leaders that still meets every two months to discuss internal and foreign affairs. A special clause ensured that no criminal charges could be brought against the coup leaders.
Evren defended the Constitution, saying it was designed to avoid mistakes that led to the civil strife of the 1970s.

Evren set parliamentary elections for 1983 but only allowed three parties with carefully vetted leaders to run. Former leaders such as Necmettin Erbakan and Süleyman Demirel, who was ousted by the coup and former Prime Minister Bülent Ecevit, whom he also blamed for the country's ills, were barred from politics.

On the eve of the elections Evren all but told voters to cast their ballot in favor of a retired general who headed one of the three parties running. This, however, backfired and Turgut Özal, a liberal whom Evren had put in charge of the economy, was elected prime minister after winning with an overwhelming majority and ushered in an era of economic liberalism.

To Evren's dismay, another referendum in 1987 lifted the ban on former politicians and both Demirel and Ecevit returned to politics.
In 2010, on the 30th anniversary of Evren's takeover, the public voted in a referendum on a series of amendments to the Constitution, including lifting the coup leaders' immunity from prosecution. Human rights activists rushed to petition courts for Evren's prosecution the following day.

The trial against Evren and Şahinkaya, the other surviving coup leader, began in April 2012. Both men were too ill to attend but gave brief statements to the court through a video link system from their hospital beds.

During the proceedings, Evren refused to answer questions from prosecutors, maintaining that the court had no right to put him on trial. He made a brief statement saying the military was forced to intervene and introduce a "new constitutional order to bring peace and calm."

"The Sept. 12 movement was a historic event," he said. "Historic events cannot be put on trial. They are examined scientifically."

"The great Turkish nation did not deserve to live through the [1970s] events," he said. "We did what was right at the time and if it happened today we would carry out a military coup again."

After his retirement he moved to the coastal Mediterranean town of Marmaris where he took up painting, but returned to Ankara when he became too frail so that he could be near the capital's military hospital.

Evren's wife, Sekine Evren, died in 1982. He is survived by three daughters. Funeral arrangements were not immediately announced.