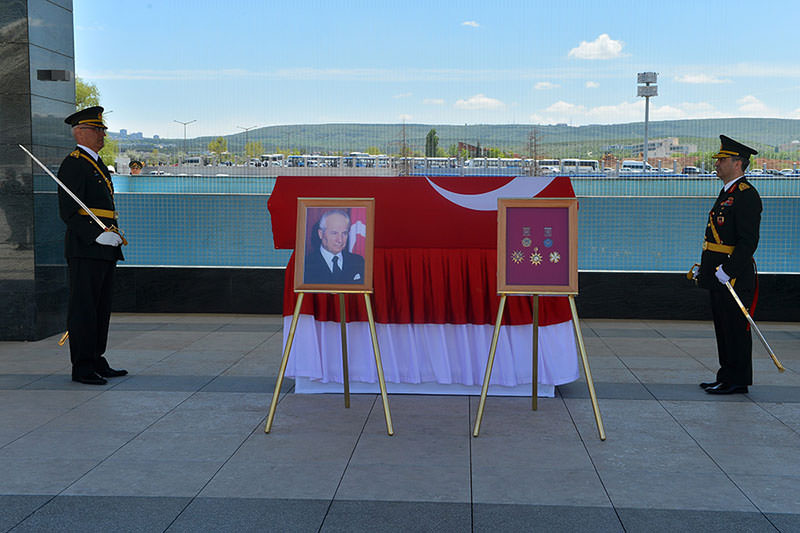 by Daily Sabah May 12, 2015 12:00 am
Kenan Evren, who led the 1980 military coup as the chief of staff and then took over as president, was laid to rest on Tuesday at Ankara's State Cemetery. Evren died at the age of 98 on Saturday.

The 1980 coup regime, which Evren led, was known for widespread torture, executions and rights abuses and the 1982 Constitution that significantly limited rights and freedoms. The body of the coup leader was first taken to the Office of the Chief of Staff before the funeral prayers, which no current political leader or government official attended.

The body of Evren, who was serving as the chief of general staff when he executed the military coup before assuming the post of the president between 1982 and 1989, was first taken from the GATA military hospital, where he died on Saturday at the age of 98, to the Office of the Chief of Staff.

Journalists were not allowed to follow the ceremony held at the office. The body was later taken to the Ahmet Hamdi Akseki Mosque, where it was placed on a catafalque. After the funeral prayers attended by family and friends, Evren was buried at the state cemetery as per his family's wishes. No senior government official or opposition leader attended the ceremony.

Evren, who has come to symbolize the widespread torture, executions and military tutelage of politics that came after the coup, is a hate figure in the eyes of most. Evren, who was tried and found guilty for leading a coup had been demoted to a private but the decision was suspended pending an appeal.