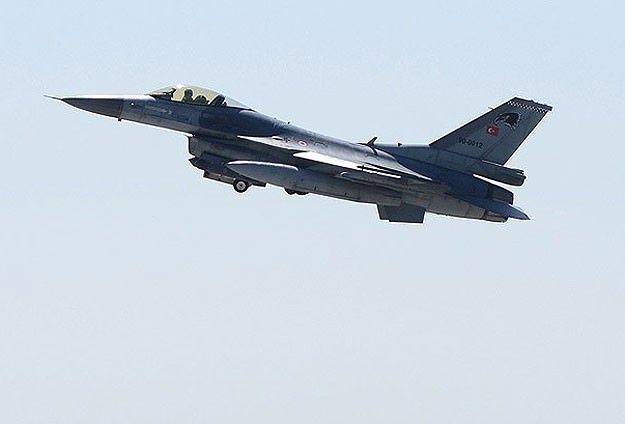 |AA Photo
by Daily Sabah with AP May 16, 2015 12:00 am
Acting according to the rules of engagement, Turkey fired two missiles on a Syrian aircraft after it violated Turkey's airspace. The aircraft disappeared off the radar following Turkey's preventive attack.

A security official told Daily Sabah that Turkish aircrafts, taking off from the southern Turkish city of Adana, fired two missiles and some residents in the region claimed that the Syrian aircraft fell down after the attack.

Dogan News Agency reported Sunday that the downed aircraft is an unmanned aerial vehicle (UAV), publishing photos of a downed UAV and quoting locals that said the aircraft did not sound like a jet, but probably a normal plane or UAV.

Turkish military had abstained from specifying the aircraft, while Syrian state sources stated that the downed aircraft is an UAV on late Saturday.

Turkish Prime Minister Ahmet Davutoğlu had earlier referred to the aircraft as a helicopter.

Meanwhile, Turkish Defense Minister İsmet Yılmaz told state-run Anadolu Agency that the 'helicopter' was brought down Saturday after it crossed at Cilvegözü, near the southern Turkish city of Reyhanlı. The 'helicopter' had been in Turkish airspace for five minutes and was shot down about seven miles from the crossing.

"I congratulate our armed forces which properly carried out their duty and showed the Syrian forces the necessary reaction. I embrace all of our pilots," Yılmaz said. He rebutted the Syrian claims, saying he has seen information that the aircraft was a helicopter. Turkish media reported that jets took off from a base in the southern city of Adana to intercept the aircraft.

It was not immediately clear if anyone was injured in the incident.

The incident is the second time since last year that Turkey has brought down a Syrian aircraft. In March 2014, Turkish fighter jets shot down a Syrian war plane, an incident the Syrian government called a blatant aggression.

Turkey, a NATO member that once enjoyed good ties with Syria, has emerged as one of the strongest critics of Syrian President Bashar Assad and is backing rebels trying to remove him from power.