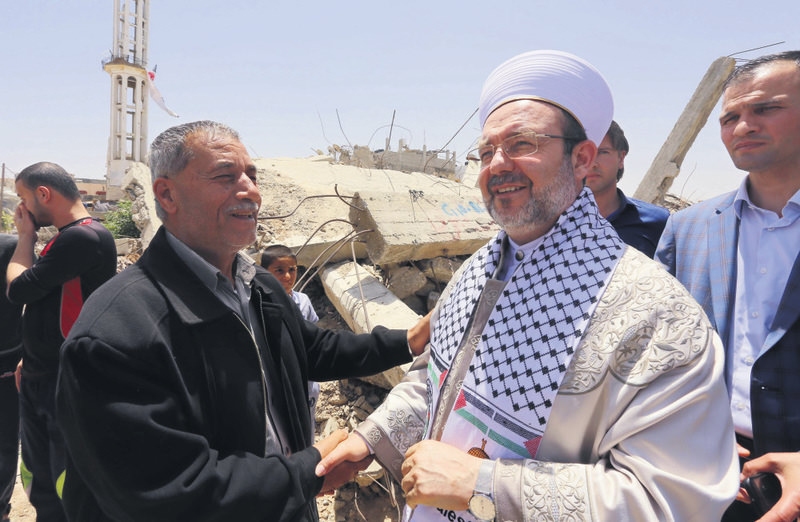 by Anadolu Agency May 18, 2015 12:00 am
Mehmet Görmez, the head of Turkey's Presidency of Religious Affairs (DİB) visited a hospital built by Turkey in Gaza on his second day of a landmark trip to the Palestinian city. Görmez said he was pleased to see Turkey's mark in Gaza, adding his country would initiate repairs to mosques and hospitals in the city. "We will always give a helping hand here," Görmez stated.

The head of Turkey's top religious authority visited the Turkish-Palestinian Friendship Hospital. Construction of the hospital in southern Gaza started in 2011 but an Israeli blockade in place since 2007 prevented the completion of the hospital equipped with 170 beds and state-of-art medical equipment.

Görmez said his trip to Gaza was "late," but he was glad to be here at last. "The Turkish government and public will continue helping the oppressed," he said.

Görmez noted that he saw a sign amid ruins of a mosque that read "Invaders destroy, Turkey builds," adding, "Building something adds value to humanity while destroying is only a crime and one of the greatest sins. So, our nation will continue building."

The DİB head pledged Turkey will also continue its political support for the people of Palestine.

He later visited Shujaiyyah, a Gazan neighborhood largely demolished in Israel's latest attacks in 2014. "Ruined buildings here show how cruel, how violent mankind can be. I wish peace to prevail in Gaza and the entire region," he said.

Israel's attacks have destroyed 64 mosques and heavily damaged 150 others according to the Palestinian authorities. Görmez said they would help to rebuild the mosques.
Last Update: May 18, 2015 9:31 pm
RELATED TOPICS