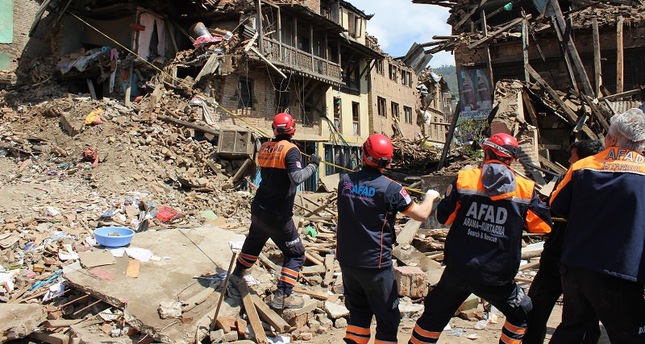 AFAD's rescue team works in Nepal on April 27, 2015 (AA Photo)
by Daily Sabah with AA May 19, 2015 12:00 am
Turkey's emergency agency announced on Tuesday it would continue to support quake-hit Nepal, sending a four-ton medical and food supply package.

The head of Turkish Prime Ministry Disaster and Emergency Management Presidency (AFAD), Fuat Oktay told reporters in Istanbul that the AFAD and other Turkish aid teams have been continuing their search and rescue efforts in Nepal.

"With this aid, the AFAD will have reached about 20 tons of humanitarian assistance to Nepal to date," said Oktay, adding that aid materials were being delivered to the Nepalese Health Ministry.

Oktay recalled that the AFAD, Turkish Red Crescent and Doctors Worldwide were among the first teams that arrived in Nepal after the tremor.