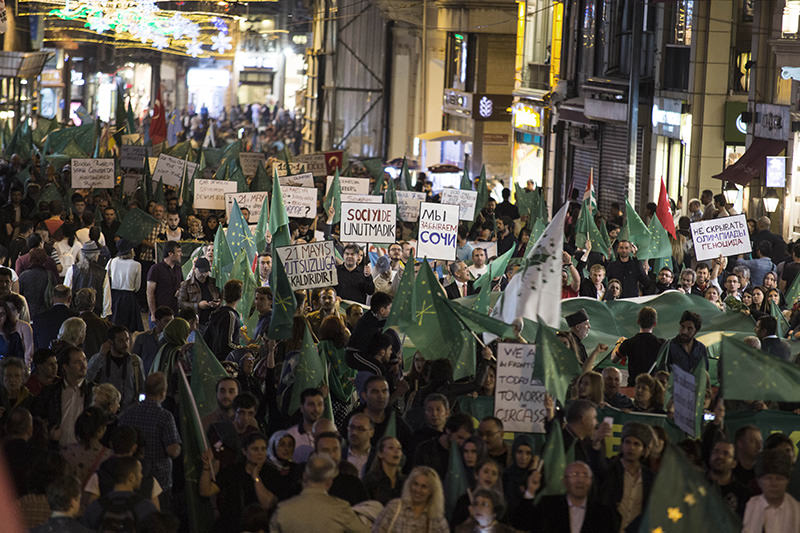 | AA Photo
by Daily Sabah May 24, 2015 12:00 am
A group of Circassians calling themselves "Circassia Patriots" left a black wreath at the Russian consulate in Istanbul on Sunday, condemning Russia on the 151th anniversary of Circassian exile under the Russian Empire.

Activists chanted slogans like "Circassia is our homeland," referring to the Caucasian region currently under the control of the Russian Federation before leaving the wrath with a banner reading "Anniversary of Circassian Genocide."

The protest was smaller compared to Thursday's rally outside the Russian Consulate to denounce the Russian Federation.

Demonstrators gather every year outside the consulate on the occasion of the Circassian Genocide and Exile Day, to condemn the expulsion and massacres.

More than 500,000 people were killed in the Russian-Circassian wars between 1763 and 1864, which led to hundreds of thousands of Circassians leaving their homeland for the Caucasus. After a defeat in 1864, the Circassians – whose number was estimated to be about 1.5 million – were forced into exile to various countries. Most Circassians were herded onto ships to be transferred from the northeastern shores of the Black Sea to Ottoman territories in present-day Turkey. Thousands perished due to hunger and thirst, while many others died when their ships sank.

Circassians called on Russia to recognize the incidents as genocide and compensate the losses. The sizeable Circassian community in Turkey has called on Ankara to support their cause in a full-page ad published in Turkish newspapers earlier this week. The community has also called on Parliament to debate "genocide and exile" and issue an open condemnation of crimes against humanity committed by the Russians toward the Circassians.
Last Update: May 25, 2015 1:36 am
RELATED TOPICS