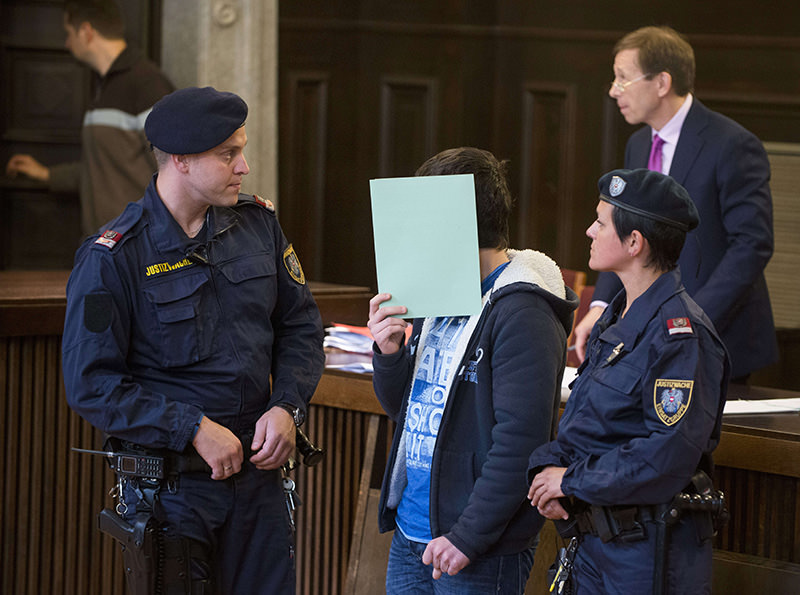 15-year-old Austrian schoolboy (C) with alleged ties to ISIS accused of having intended to launch a bomb attack in Vienna in 2014 enters the courtroom prior to the start of the trial on May 26, 2015, in St Poelten, Austria (AFP Photo)
by May 26, 2015 12:00 am
A 14-year-old Austrian teen with ties to the self-proclaimed Islamic State of Iraq and Sham (ISIS) was convicted on Tuesday of planning to bomb a Vienna train station and sentenced to eight months behind bars.

The student, named only as Mertkan G., was also found guilty of belonging to a terrorist organization and given an additional suspended jail sentence of 16 months by a court in his hometown of Sankt-Poelten.

According to the charge sheet, the teenager, who emigrated from Turkey in 2007, wanted to carry out the attack before travelling to join "holy war" in Syria alongside the ISIS.

Police had said at the time of his arrest in October 2014 that the teen made "concrete enquiries about buying ingredients" for a bomb and "planned to explode the devices in public places, such as the Vienna Westbahnhof," a major train station.

His lawyer, Rudolf Mayer, had told Agence France-Press that his client, who turns 15 in the coming days, had only been "playing with the idea" of making a bomb. He has been in custody since January after breaking the terms of his parole.

Unconfirmed press reports said that ISIS had offered to pay him 25,000 euros ($27,250) if he managed to carry out the attack.

Like other European countries, Austria has seen a steady flow of people leaving or attempting to leave the country in order to join ISIS militants in Syria and Iraq.

According to the Austrian Ministry of the Interior, more than 200 have done so, including women and minors. Around 70 have since returned, several of whom are in custody awaiting trial.
Last Update: May 27, 2015 12:36 am
RELATED TOPICS