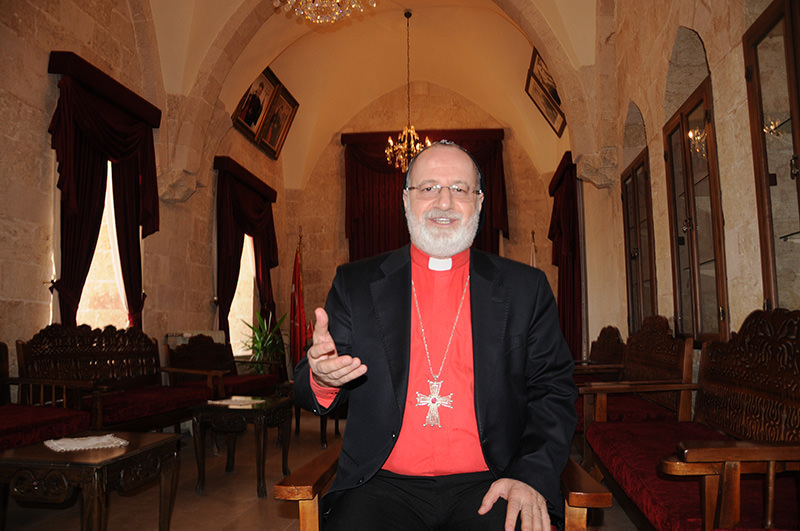 Saliba u00d6zmen, Metropolitan of the Mardin and Diyarbaku0131r provinces for the Assyrian Orthodox Church (AA Photo)
by Anadolu Agency Jun 02, 2015 12:00 am

Turkey’s reconciliation process, or steps taken to end terrorism and restore the rights of the Kurdish community, instills hope in the Assyrian community in the southeast, as they hail the process and the ‘democratization package’ helping them to reclaim properties once seized by the state

Turkey's reconciliation process, or steps taken to end terrorism and restore the rights of the Kurdish community, instills hope in the Assyrian community in the southeast, as they hail the process and the "democratization package" helping them to reclaim properties once seized by the state.

The reconciliation process initiated by the government is a win-win for the Assyrian community in the southeast, as it helps to both maintain peace in the region, a motive for the return of Assyrians home, and restores churches and monasteries in the absence of insecurity.

The country's southeast is home to a large number of Kurds as well as an Assyrian Christian community. The region has long been plagued by terrorism perpetrated by the PKK and oppressive state policies that stifled the rights of the Kurdish community. The situation was no different for religious minorities in the region that suffered from the seizure of church properties, as was the case in other Turkish regions in light of state policy toward minorities.

Two years ago, the government launched a "democratization package," a set of reforms aiming to restore the rights of Kurds and other suppressed groups. The Assyrian community is among those benefiting from the package that caters to ethnic as well as religious groups.

As the democratization process began, the Assyrian's Mor Gabriel Foundation won its right to own 244 acres of land and restore ancient places of worship long left in ruins.

Saliba Özmen, Metropolitan of the Mardin and Diyarbakır provinces for the Assyrian Orthodox Church, said the reconciliation process bore importance for all communities in Turkey. "This peace process stands out [in the Middle East], especially as you see the developments in Iraq and Syria. Turkey is a safe harbor in the region. We fully support the reconciliation process and pray for it to continue."

Özmen added that one of the significant effects of the reconciliation process was that it encouraged Assyrians living in Europe to return to Turkey.

The Assyrian community is hopeful about the future. Özmen stressed that the restoration of old churches in the city of Mardin and the return of properties to the Mor Gabriel Foundation are valuable developments. The one problem they encounter is lack of educated priests; however, Assyrian priests from Iraq and Syria help them to cover the shortage.

Gabriel Akyüz, the archbishop of the Kırklar Church in Mardin, said the reconciliation process adds value to the city in every field "from culture to tourism." "Everyone is pleased. After all, an environment of peace and security is more important than anything else," he said. Akyüz underscored that the reconciliation process brought positive developments for the Assyrian community. "We are happy and we appreciate the state for the steps it has taken but they are not enough. Some Assyrians who left the region decades ago have returned and their number will increase if the peace prevails," he said.

Anto Nuay, head of a foundation of Syriac churches, said the reconciliation process and overall democratization process was good news for the entire Assyrian community. "We want the process to continue and we applaud what the government has done," he said.
Last Update: Jun 02, 2015 9:42 pm
RELATED TOPICS