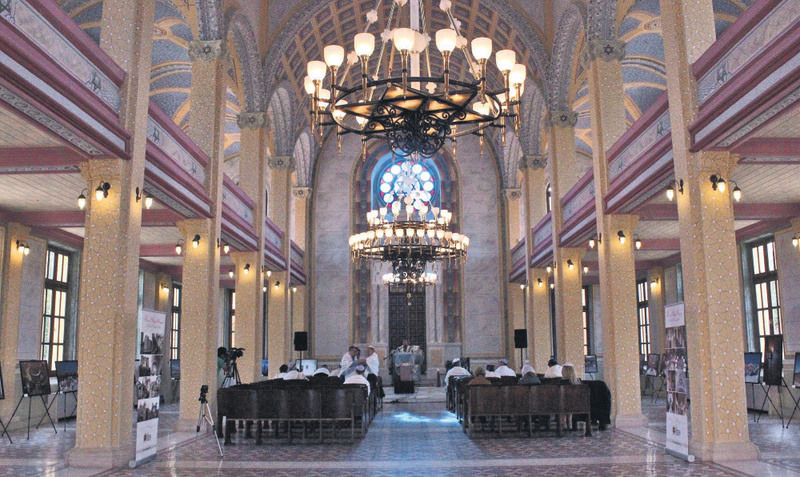 Although there is only one Jewish family in Edirne, the synagogue often hosts Turkish Jews from Istanbul 237 kilometers east of the city.
by Daily Sabah with Wires Jun 03, 2015 12:00 am

Turkey's Jewish community announced yesterday the Great Edirne Synagogue, a monumental place of worship in northwestern Turkey, will host an iftar dinner during the upcoming Muslim fasting month of Ramadan.

The synagogue, opened in March after a restoration project funded by the government, is touted as the largest Jewish temple in the Balkans and the third-largest synagogue in Europe. It is also perhaps the largest restoration project for a non-Muslim place of worship in Turkey. Now, it will witness another event bringing Muslims and Jews of the country together. Leaders of the Jewish community announced yesterday at a press conference that it will host an iftar, a dinner to break the daily fast for Muslims during the month of Ramadan.

İshak İbrahimzadeh, leader of the Turkish Jewish community, accompanied the faithful in morning prayers at the synagogue yesterday. He told reporters that they were happy to host the first iftar dinner at the synagogue. Jews already host such dinners in Istanbul as a sign of friendship with other communities. "We are preparing a special event on June 22. It will start with an exhibition of Jewish clothes and dresses from the Ottoman era. A choir from the Culture Ministry will then sing hymns; it will be followed by an iftar dinner. Our community in Istanbul will join their fellow citizens at the dinner. We are also planning another iftar outside the synagogue," he said. İbrahimzadeh added that they invited Deputy Prime Minister Bülent Arınç, who inaugurated the synagogue in March, to the dinner.

The Great Edirne Synagogue, also known as Kal Kadoş Ha Gadol, frequently hosts Jews from other Turkish cities, as Edirne does not have a large Jewish population. İbrahimzadeh said they had no resident rabbi currently assigned to the synagogue, but they would consider assigning one if the Jewish community attending the place of worship expands.

The synagogue was built in 1907 after a large fire destroyed 13 synagogues in Edirne in the early 20th century. It was in use until 1983, but it was abandoned when the number of Turkish Jews dwindled in Edirne. The General Directorate of Foundations, the state-run agency overseeing the restoration of religious sites, began the restoration work of the building four years ago. Through the restoration work jointly conducted by Jewish architects, it was restored to its former glory through an interior and exterior makeover.
Last Update: Jun 04, 2015 12:14 am
RELATED TOPICS