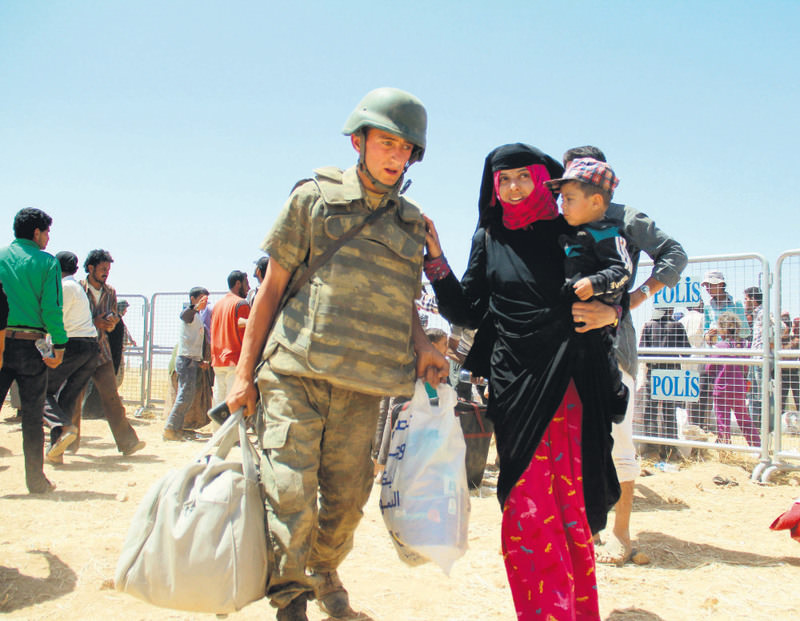 A Turkish soldier carrying a Syrian woman's bags as she crosses into Turkey from Syria. Hundreds entered Turkey over the past few days while more people head to the border with the conflict escalating in Syria.
by Daily Sabah Jun 05, 2015 12:00 am

Nearly 3,000 Syrians fleeing al-Hasakah, a city struck by clashes between Kurdish forces, ISIS and Syrian regime forces, arrived in Turkey over the past 3 days

Turkey faces a new wave of displaced Syrians as a city located across the Turkish border is mired in a fresh battle. Al-Hasakah, one of the largest cities in northeastern Syria, has become the scene of a brutal battle between the Islamic State of Iraq and al-Sham (ISIS) and the Kurdish Democratic Union Party's (PYD) People's Protection Units (YPG), a Syrian Kurdish faction sharing control of the city with Syrian President Bashar Assad's forces.

Customs and Trade Minister Nurettin Canikli told Anadolu Agency (AA) that the number of Syrians entering Turkey from al-Hasakah reached 3,000 as of Thursday. Authorities expect more arrivals on Friday and the following days as clashes continue.

Turkey, which shares a lengthy border with its southern neighbor Syria, pursues an open-door policy for displaced Syrians, although security measures have been escalated to prevent infiltration into Turkey from Syria. Syrians are admitted into Turkey after being searched and they are subject to biometric registration on the border. The Disaster and Emergency Management Authority (AFAD) handles the influx and dispatches new arrivals to refugee camps in border cities after registration.

Accounts of displaced Syrians entering Turkey through the border town of Akçakale reveals the dire situation on the ground. Juma Sabkiy told AA that warplanes pounded numerous villages in the Ras al-Ayn district and Syrian regime forces expelled them. "They razed our houses to the ground. We had nothing left. Currently, there is no one in my village. In every air raid, dozens of people die," he said.

Ibrahim Jubur, another Syrian who fled to Turkey, claimed armed militants forced them to evacuate the villages. "They said 'this land is ours. Go away.' If someone opposes, they torture them. They try to drive out Arabs from villages," he said.

Fatma Mukri said she and her family had to walk for 10 days when their village was bombed, and her children fell ill during the journey.

Along with AFAD officials, Turkish troops deployed on the border rush to help the exhausted Syrians who braved a long and perilous journey to Turkey. Soldiers welcoming Syrians carry their possessions and offer them water and food. Speaking to AA, Fidda al-Hasan, a Syrian woman, said: "Troops here help us while troops in our country kill their own people."

The country last saw such a large flow of refugees from Syria in September 2014 when nearly 250,000 Syrian Kurds from Kobani, another town where Kurdish groups fought against ISIS attacks, arrived in Turkey.

Since the conflict broke out in Syria, Turkey has received a steady influx of Syrian refugees. About 259,000 of them live in 25 camps operated by AFAD in cities along the 915-kilometer border, while others with the means to do so rent or buy houses and impoverished ones take shelter in parks and abandoned buildings. Currently, some 1.8 million Syrians are estimated to be in the country.

As Turkey copes with the flow of Syrian refugees entering Turkey through its southeastern border, the country's Coast Guard strives to stop another wave of Syrians seeking to leave the country to reach Europe in pursuit of a better life. These illegal immigrants traveling in heavily overcrowded boats constantly risk their lives, and the Coast Guard often saves them from certain death at sea. On Friday, 49 Syrian migrants, including children, were stopped by Turkish troops as they were traveling to Greek islands in the Aegean Sea on a small rubber boat. Troops rounded up the migrants, who would have most likely failed to reach their destination. U.N. refugee agency (UNHCR) officials said an average of 600 people try to reach Greece, a main gateway to Europe, every day via Turkey. "The refugees cross the eastern Aegean Sea from Turkey in small, flimsy boats and inflatable rafts. They are landing in as many as 15 different Greek islands or are being rescued at sea by the Greek coast guard," UNHCR spokeswoman Melissa Fleming said at a press conference on Friday. "The largest arrivals have been on Lesvos, Chios and Samos and the Dodecanese Islands, particularly Kos and Leros. Smaller numbers of refugees have also been crossing through Greece's land border with Turkey at Evros," she said.
Last Update: Jun 05, 2015 11:12 pm
RELATED TOPICS