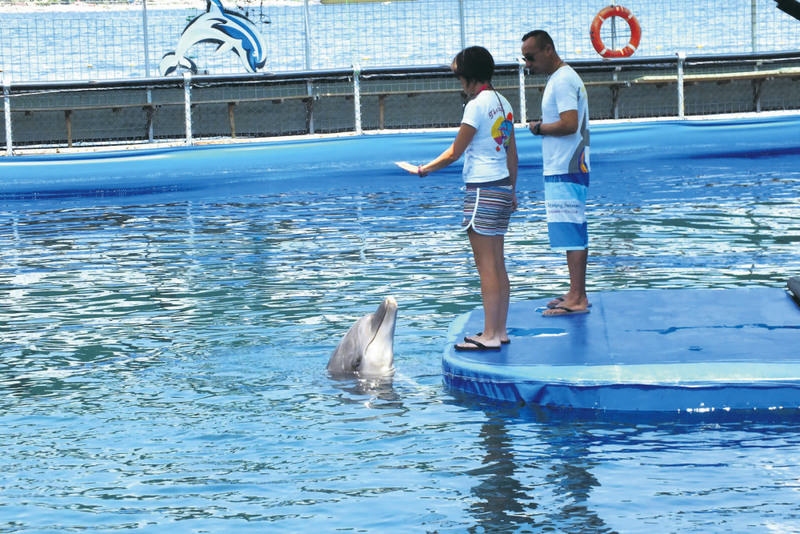 by Daily Sabah Jun 08, 2015 12:00 am
A group of activists staged a demonstration yesterday calling on a venue that hosts dolphin shows to "empty the tanks." Protesters joined a global protest against the use of dolphins for entertainment purposes and their confinement.

Gathering outside the hotel where the dolphin park is located, activists waved banners reading: "Do not imprison dolphins."

Speaking on behalf of the activists, Tracy Özgünler said dolphins were held captive in the park and are living in an unhealthy environment. "These animals need to swim at least 30 kilometers a day but they are kept in small tanks and used to entertain the audience. They are supposed to live at sea, not here," she said. She called on Turkish authorities to help with their cause. The park's manager Elena Gerasimova defended the operation saying they did not mistreat animals in the park. "We have only five dolphins here and our facility is one of the best in Europe in terms of the treatment of dolphins. These animals are used for therapy of the disabled children and are treated with the utmost care," she said.

The nationwide initiative, called "Empty The Tanks," is calling for the closure of marine entertainment parks around the world or their transfer to enclosures at sea. Turkey has nine dolphin parks mainly in the cities in its Mediterranean region. They operate as dolphin "therapy" centers for autistic children. Activists say dolphin therapy has no scientific basis. Turkey is party to the Bern Convention that bans the hunting and captivity of dolphins and other marine mammals.
Last Update: Jun 08, 2015 1:22 am
RELATED TOPICS