One in three workplaces fails at labor safety inspections 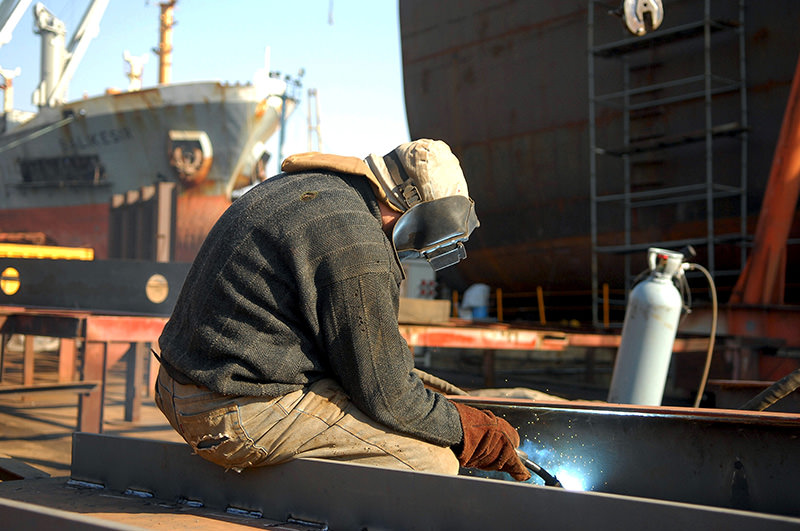 | AA Photo
by Daily Sabah Jun 08, 2015 12:00 am
Last year witnessed major accidents in Turkey blamed on labor safety or its lack thereof. Two mining accidents in western Turkey's Soma and central Turkey's Ermenek killed 319 people, fueling outrage on the state of the country's coal mines in terms of safety. Then, in September, 10 workers were killed when an elevator crashed to the ground at an unfinished residential block at a construction site in Istanbul. The mining and construction sectors are among the riskiest sectors in terms of labor safety in the country and attention has turned to official inspections of mines and construction sites.

Turkish daily Habertürk reported inspections rose 62 percent in 2014, and 14,174 workplaces were examined for labor safety compared to more than 8,000 inspected in 2013. The work was suspended at 526 businesses in 2013 due to labor safety violations whereas this number skyrocketed to 4,045 last year. A total of 28 percent of workplaces did not comply with work safety and labor health standards.

Along with regular inspections, officials from the Labor and Social Security Ministry conducted inspections on tip-offs, usually after accidents.

Statistics show a total of TL 87.9 million ($31.78 million) were issued in fines to workplaces, and a majority of fines were imposed over shortcomings in work safety.

The country has high standards of work safety in line with international guidelines of the International Labour Organization (ILO), but officials say regulations, harsh sentences against companies ignoring safety and other measures cannot be the sole solution to preventing accidents. A change of mindset is essential for companies to implement costly safety measures and to help workers forced to work without safety precautions to make a living, according to experts.

Parliament passed a bill this year that boosts the rights of workers in terms of work safety. The bill reduced the working hours of miners while bringing heavier sentences for companies involved in incidents stemming from noncompliance with work safety standards. It also increased fines for the absence of safety equipment in hazardous workplaces such as mines and construction sites.

The government had already implemented an occupational health and safety law in 2012 that brought forward an approach based on risk assessment in workplaces and obliged businesses to ensure the safety of all of their employees through the employment of safety experts.

Highlighted among the new laws are rewards for companies with a good safety record such as lower taxes as well as tougher fines or sentences for ill-reputed ones with poor safety records.
Last Update: Jun 08, 2015 7:10 pm
RELATED TOPICS