Thousands flee into Turkey from Syria as battle rages 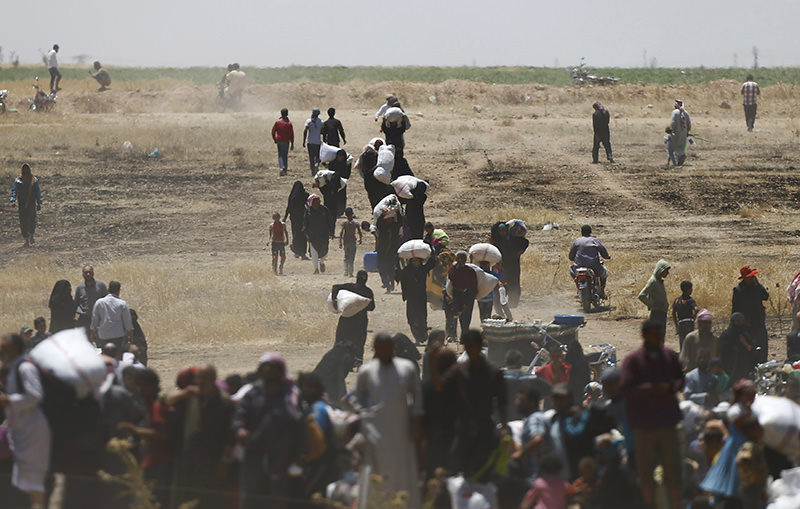 Syrian refugees wait behind the border fences as they are pictured from the Turkish side of the border, near Akcakale in Sanliurfa province, Turkey, June 10, 2015 (Reuters Photo)
by Daily Sabah with Reuters Jun 10, 2015 12:00 am
Thousands of people crossed from Syria into Turkey on Wednesday to flee a battle between the Islamic State of Iraq and al-Sham (ISIS) and Kurdish militants for the Syrian border town of Tel Abyad.

A Reuters photographer at the scene said many of them were women and children and they had entered Turkey through a make-shift border crossing between official gates. Turkish gendarmerie officers oversaw the transfer, he said.

ISIS is in control of the border town in Hasaka province. The group last week launched a counter-offensive in the provincial capital, Hasaka city, that is divided into zones run separately by the government of President Bashar Assad and Kurdish factions.

"There are 2,000 people today that are being processed," a Turkish official said, explaining that they undergo registration and health checks before being allowed to enter.

"They are escaping coalition bombardments as well as YPG advancement," he said, referring to the Kurdish militia and U.S.-led coalition giving aerial support to Kurds.

Local media had reported a buildup of refugees waiting to cross in recent days.

The Turkish official said since last week 6,837 people were admitted in the area, and 86 of them were Iraqi nationals.

Numan Kurtulmuş, deputy prime minister who greeted Syrians as they entered into Turkey, said the new wave of Syrians was the result of a circle of fire surrounding the public. "There are air raids by coalition forces and then there are raids by YPG and ISIS. Civilians flee for their lives. We are sensitive on this issue and Turkey is ready to give all support it can (to refugees). This is a dirty and bloody war," he told reporters.
Last Update: Jun 10, 2015 5:28 pm
RELATED TOPICS