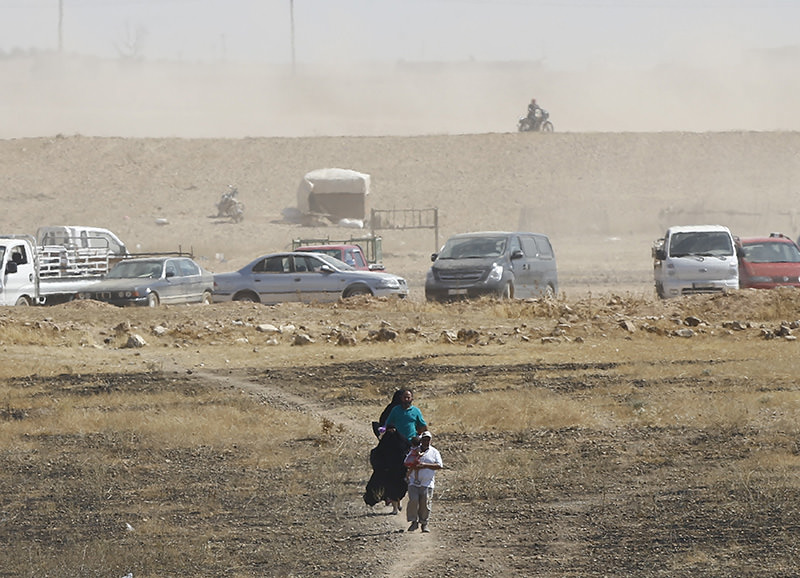 Syrian refugees walk towards border fences as they are pictured from the Turkish side of the border, near Aku00e7akale in u015eanlu0131urfa province, Turkey, June 10, 2015 (Reuters Photo)
by Jun 11, 2015 12:00 am
Thousands of people fled from Syria into Turkey on Wednesday as Syrian opposition fighters and Kurdish forces fought the self-proclaimed Islamic State of Iraq and al-Sham (ISIS) insurgents holding the Syrian border town of Tel Abyad.

A Reuters photographer at the scene said the refugees had entered Turkey through a makeshift border crossing overseen by Turkish gendarmerie officers, and that many of them were women and children.

A Turkish official said 2,000 refugees were being registered on Wednesday after more than 6,800 were admitted in the area last week.
He said they were fleeing advances by Kuridsh People's Protection Units (YPG) forces as well as aerial bombardment by the United States and Arab allies trying to help the Kurds push back the ISIS.

The northeastern corner of Syria is important to ISIS because it links areas under already its control in Syria and Iraq.

The group last week launched an offensive on the provincial capital, the city of Hasaka, which is divided into zones run separately by the government of President Bashar al-Assad and a Kurdish administration.

But Syria's Kurds have also sought to take advantage of Syria's complex war to expand their control over a region, stretching from Kobani to Qamishli.

The Turkish official said it appeared that all the refugees were Syrian or Iraqi Arabs, rather than Kurds.

"A significant demographic change is taking place in the area. Arabs are being pushed away as Kurds flow in," he said. "Moving forward, the native population of the region might not have a place to go back to."