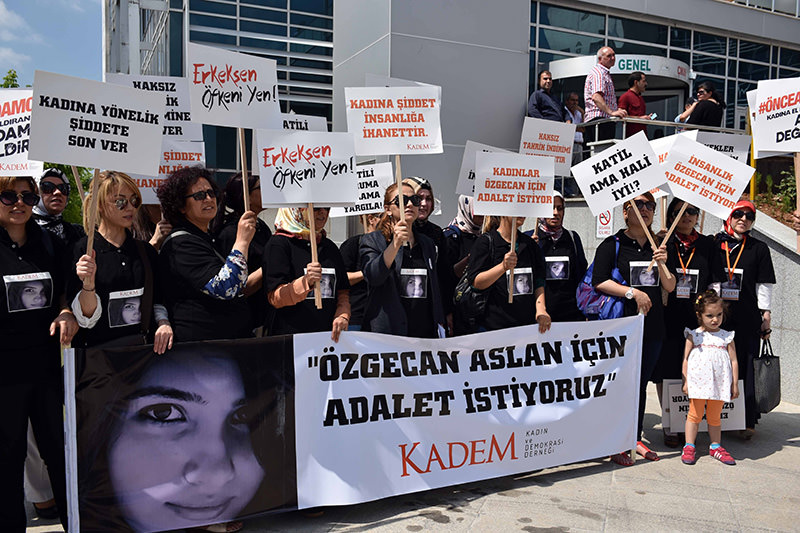 | AA Photo
by Daily Sabah with Agencies Jun 12, 2015 12:00 am
Three men have gone on trial in Turkey's southern province of Mersin on Friday amid high security over the murder and attempted rape of a 20-year-old student Özgecan Aslan earlier this year that sparked a wave of anger over violence against women.

The three men were brought to the local courthouse in the middle of the night to avoid possible tension.

A prosecutor has requested a life sentence for them for what he described as the "merciless killing of Aslan". The defendants have begun to present their case after the court read the indictment.

In a show of solidarity, some 1,000 lawyers have requested to take part in the trial to represent Özgecan Aslan as co-plaintiffs and television pictures showed them arriving in buses from all over Turkey.

However there is only space for around 100 in the court. Hundreds of supporters also massed outside the court, holding up pictures of Özgecan and urging justice. Outside the courthouse, various women's organizations staged protests over Aslan's killing.

Aslan's parents were not present during the court hearing. Instead her uncle represented the family.

Özgecan Aslan was murdered in the southern region of Mersin in February on a minibus when returning home from a shopping trip, a crime that sparked street protests and Internet campaigns.

The driver of the minibus, Ahmet Suphi Altindöken, is accused of driving Özgecan Aslan to a wood after all the other passengers had gotten off and attemped to rape her.

The young woman fought back using pepper spray, but Altindöken bludgeoned and stabbed her to death.

Meanwhile the suspect's father, Necmettin Altindöken, and a friend, Fatih Gökçe, were also arrested and charged with helping him hide the crime and conceal evidence. The remains were found by police and the three were arrested.

If found guilty, all face aggravated life imprisonment -- life jail sentences with tougher conditions -- the highest penalty possible in Turkey after its abolition of the death penalty.