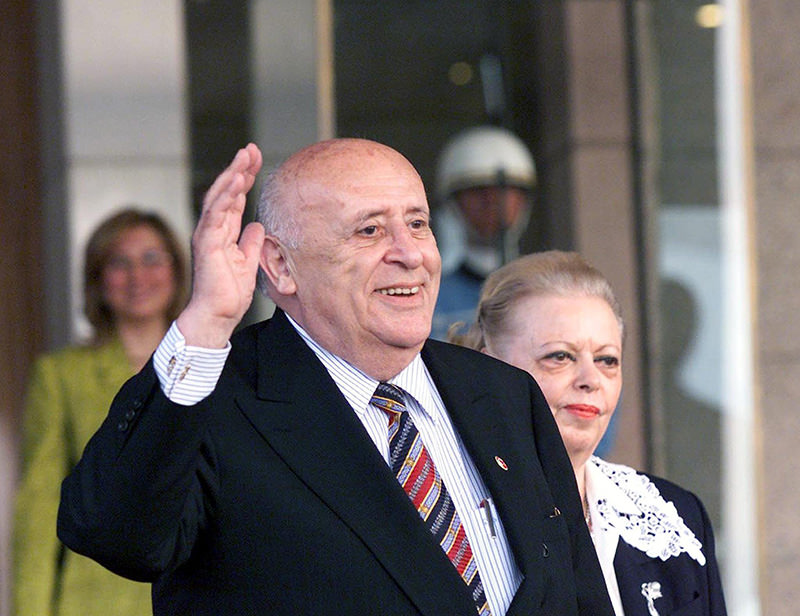 A file picture dated 16 May 2000 shows former Turkish President Suleyman Demirel, flanked by his wife Nazmiye Demirel, after the handing over of power to the back then Turkish President Ahmet Necdet Sezer in Ankara, Turkey (EPA)
by Daily Sabah with AA Jun 17, 2015 12:00 am
President Recep Tayyip Erdoğan and Prime Minister Ahmet Davutoğlu have offered their condolences over the death of Turkey's 9th President Süleyman Demirel on Wednesday.

In a statement on Turkey's Presidency website President Erdoğan said, "I have learnt with deep sorrow that our ninth president Süleyman Demirel, who left his mark on Turkish political history and contributed to development process of our country, has passed away. He will be always remembered by our honored people in the future for his important role as a politician and his service to our country."

"I offer my condolences to his family and our people," he said.

Prime Minister Ahmet Davutoğlu has also offered his condolences on his official Twitter account saying, "It is with deep sorrow to learn about the passing away of Turkey's ninth president Süleyman Demirel, who left his mark on Turkish political history has passed away."

He added that Demirel was a politician who would be always remembered for his unique style and services for Turkey during his long political life.

Speaking to reporters on Wedneday, Davutoğlu said Turkey will declare a three-day national mourning for Demirel and added that his funeral ceremony will take place in Ankara on Friday and he will be buried in his hometown, Isparta on Saturday.

Demirel died of heart failure due to respiratory tract infection at the age of 91 on late Tuesday night.

He was one of Turkey's most prominent center-right political figures. He served as the country's prime minister seven times and was president from 1993 to 2000.

There are many high schools across the country, a university, and an airport in the Isparta province named after Demirel.
Last Update: Jun 17, 2015 2:14 pm
RELATED TOPICS