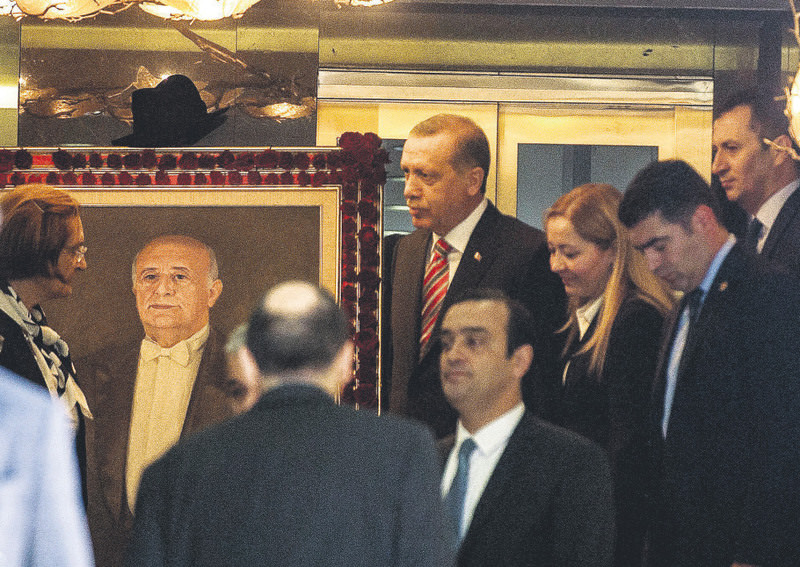 by Daily Sabah Jun 18, 2015 12:00 am
President Recep Tayyip Erdoğan yesterday paid condolences to the relatives of Turkey's ninth president, Süleyman Demirel, who passed away on Wednesday at the age of 91.

Erdoğan, who shares a place in the annals of the Republic of Turkey with Demirel as the longest serving prime minister, was on Güniz Street of the capital Ankara where the Demirel family lived.

He extended his condolences to the late president's nephew Nihan Atasagun. Speaking to reporters after leaving the Demirel residence, Erdoğan said the former president held a different place in the last five decades in Turkish politics. "He put an indelible mark on politics, especially with his peculiar personality. He left many memories behind and I believe the complex he built in his hometown Isparta will be a center of attraction from now on," Erdoğan said.

Demirel was a central figure in Turkish politics since he made his foray into the scene in the 1960s. He served as prime minister seven times, was the third-longest serving prime minister after İsmet İnönü and Erdoğan and served as president from 1993 to 2000.

He was suffering from a number of illnesses due to age that led to his passing at a hospital in Ankara.

Turkey declared three days of national mourning over his death ahead of a state funeral in Ankara today. A ceremony will be held at Parliament today. It will be followed by funeral prayers in Ankara and a burial in Isparta on Saturday in a spectacular mausoleum built during his lifetime.

Prime Minister Ahmet Davutoğlu had expressed his sorrow earlier for Demirel, saying that the late president will always be remembered for his one-of-a-kind style and for the services to his country.

Tributes poured in since his death and although reactions have been mixed, almost everyone agrees that Demirel created a likeable, idiosyncratic political personality with a folksy and ultimately pragmatic image he cultivated over the years. Major newspapers devoted large spaces on their front pages for the deceased leader while politicians extended their condolences both through written statements and visits to his residence in Ankara.

Republican People's Party (CHP) Chairman Kemal Kılıçdaroğlu said he and others learned politics and statesmanship from Demirel whom he described as an important political actor both for Turkey and the world. For Tansu Çiller, Turkey's first female prime minister, who served under Demirel, he was a mentor who dedicated himself to serving the public. For conservative groups who suffered a witch hunt during the process leading up to 1997's postmodern coup, he was accused of turning a blind eye to the army's pressure on the government that led to its collapse. Social media was awash with messages heaping praise on Demirel referred as "father," a nickname he deservedly gained for his larger-than-life political persona evident in rallying masses behind him.
Last Update: Jun 18, 2015 8:36 pm
RELATED TOPICS