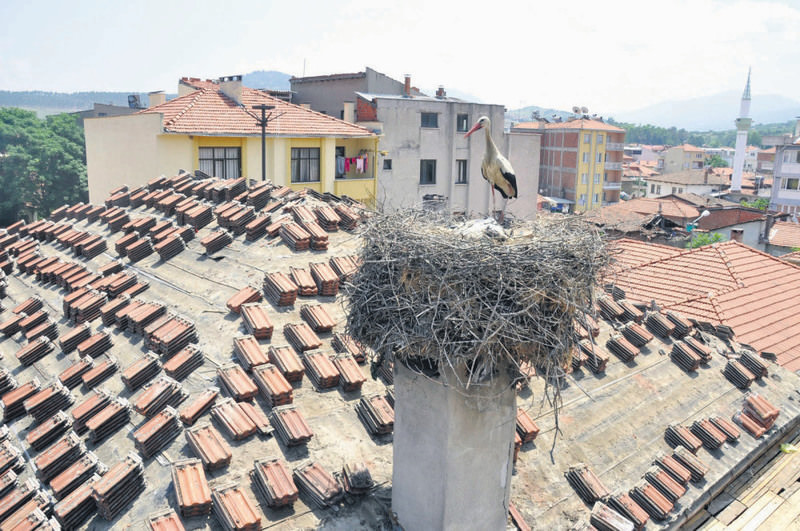 by Daily Sabah Jun 19, 2015 12:00 am
A municipality in northwestern Turkey stopped the demolition of the old town hall so as not to disturb a stork and its nestlings.

The Municipality of Sındırgı, a town in the province of Balıkesir, decided to demolish its 50-year-old town hall to replace it with a new one. The building was completely evacuated when workers found a stork that had set up a nest on one of the chimneys on the roof. After the discovery, the mayor ordered a halt to the demolition two weeks ago. Municipality officials considered moving the nest but later scrapped the plan as it could harm the three delicate nestlings. Now they are waiting for the chicks to learn how to fly, which is expected to happen in 15 days, and leave the nest with their mother.

Sındırgı Mayor Ekrem Yavaş said the building's roof has been a popular spot for storks to build nests and spend the summer for decades. He said they expected the four storks, including the mother, to take off within weeks and then they will proceed with the demolition, but only after giving them a new nest on a pole near the new building. "We invested TL 3 million ($1.1 million) for the reconstruction of the building, but now we are at the hands of the storks. Still, we don't complain. The lives of these birds are more important for us. We hope they will be here next year on the roof of the new building," Yavaş told reporters.

Unlike the current building, the new one will not have the traditional chimney but the mayor pledged that they would allocate a protruded section on the roof so that storks could build their nests.

Yavaş said locals call him "stork-friendly" after he ordered the construction of wooden nests for storks in 25 neighborhoods in the town that saved storks from electrocution and locals from power outages.

The mayor said it was only natural for them to protect the storks "as we are descendants of the Ottomans who never neglected bringing food to wild animals unable to find food in harsh winters."
Last Update: Jun 19, 2015 10:18 pm
RELATED TOPICS