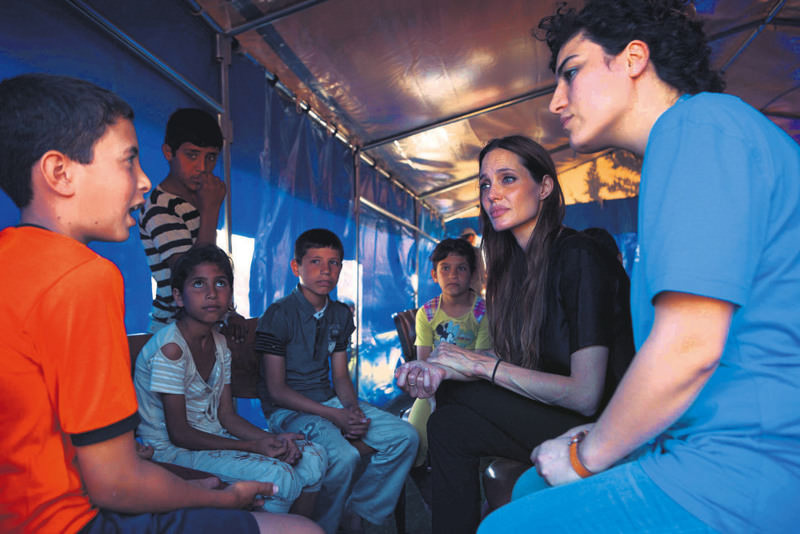 World-renowned actress Angelina Jolie is scheduled on Saturday to pay a visit to Syrian refugees taking shelter in Turkey, which hosts most Syrian refugees in the world and faces a new possible influx

Hollywood superstar Angelina Jolie, known for her work for refugees as the special envoy for the U.N. High Commissioner for Refugees (UNHCR), is set to meet Syrian refugees in Turkey's southeastern province of Mardin on Saturday.

Jolie will be accompanied by UNHCR head Antonio Guterres, who has been in Turkey for the launch of a report on the situation of refugees around the world, which showed Turkey was the top refugee-hosting nation with 1.59 million Syrians at the end of 2014.

The Oscar-winning actress first visited Syrian refugees in Turkey in 2011, when the conflict in Turkey's southern neighbor erupted. At the time of her visit to Hatay, a southern province on the border with Syria, Turkey had only about 10,000 refugees. Currently, the country has nearly 2 million refugees, but their numbers are expected to swell with new clashes between Kurdish forces and the Islamic State of Iraq and al-Sham (ISIS) terrorist organization.

Jolie, who is the mother of a multinational clutch of adopted children, including Cambodian-born Maddox, Vietnamese-born Pax and Ethiopian-born Zahara, was reportedly planning to adopt a Syrian boy, one she met during her visit to a camp in Hatay.

The camp that Jolie was set to visit hosts more than 5,000 refugees, including members of the Yazidi community who fled the ISIS takeover of Iraqi towns. There are 259,523 Syrians in 25 refugee camps in Turkey who fled the civil war in their country, according to the latest figures supplied by Turkish authorities.

Over the past two weeks over 20,000 Syrian refugees fleeing clashes in the Syrian city of Tal Abyad entered Turkey's Şanlıurfa province through the Akçakale border crossing.

The UNHCR report says that Syria is "the world's biggest producer of both internally displaced people (7.6 million) and refugees (3.88 million) at the end of 2014."

Turkey pursues an open-door policy for Syrian refugees but complains of the lack of assistance from the international community. Ankara often blames other countries for not shouldering the burden in caring for the refugees or simply not taking them in. Despite the social and financial strain it faces in with rising numbers of refugees, Turkey is not expected to shift its policy on Syrians, nor its treatment of them in the modern refugee camps that Jolie has praised in her earlier visits.
Last Update: Jun 20, 2015 2:06 pm
RELATED TOPICS