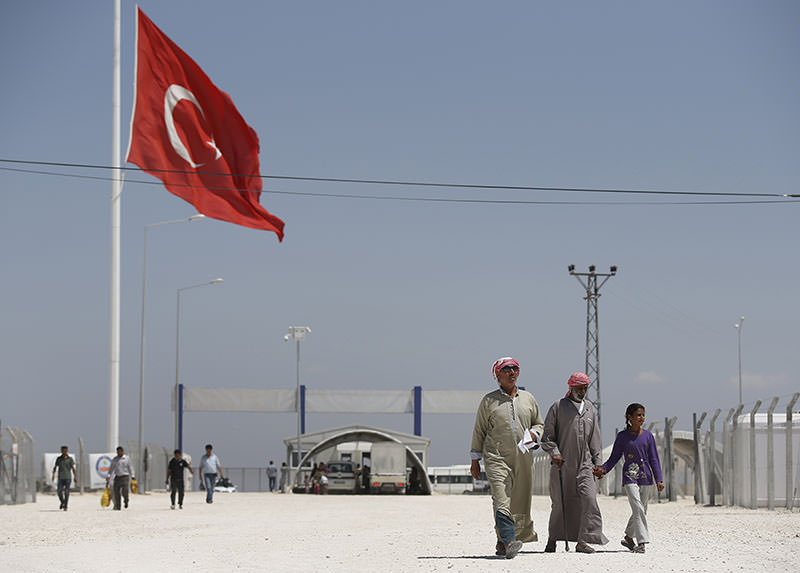 Syrian refugees walk at a refugee camp in Suruu00e7, on the Turkey-Syria border, Friday, June 19, 2015. Ahead of World Refugee Day on Saturday, June 20, 2015 (AP Photo)
by Associated Press Jun 20, 2015 12:00 am
The largest refugee camp in Turkey, in a nation which hosts the largest number of refugees in the world, Suruç is a gleaming, orderly metaphor for Turkey's open door policy toward refugees from Syria, nearly 2 million of whom have crossed the border in the past four years.

The camp holds 25,000 people in 7,000 tents split into 15 "neighborhoods," according to Abdullah Çiftci, Suruç's district governor. It has schools, hospitals, supermarkets, television tents, prayer rooms, playgrounds and even farmland.

Opened in February 2015, the camp's large pale tents set against the bright stony white ground are an immaculate showcase of Turkey's generosity at a time when other European nations talk of building walls, destroying boats, and migrant quotas.

Refugees keep flooding into Turkey as the fighting in Syria continues, but Suruç has room to grow. Çiftçi said the camp, which is dominated by a giant Turkish flag, can accommodate another 10,000 people.

UN refugee agency, UNHCR, estimated that a total of 11.6 million people from Syria had been displaced by the conflict by the end of last year, the largest such figure worldwide. Turkey is the world's biggest refugee host with 1.59 million refugees, according to the most recent U.N. figures.
Last Update: Jun 20, 2015 2:59 pm
RELATED TOPICS