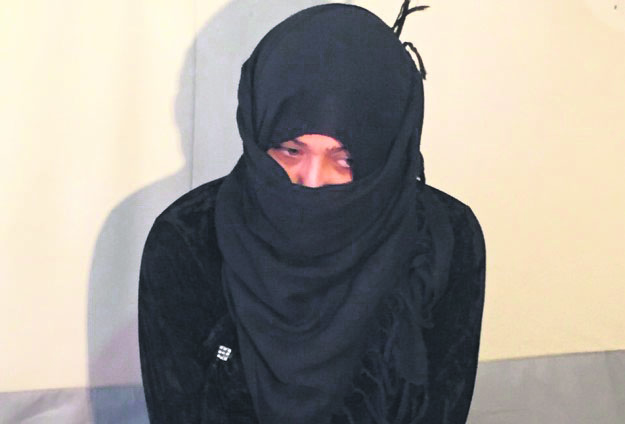 by Anadolu Agency
Jun 22, 2015 12:00 am
Meryem Abdullah, 28, a Syrian housewife, fled the war in the eastern Syrian city of Deir ez-Zor to take refuge in Turkey six months ago. The devastating civil war in Syria, which began in March 2011, has claimed more than 211,000 lives so far and destroyed thousands of homes. Even during the holy month of Ramadan, bombs continue to drop from the sky on civilians. And, every new conflict and the increasing death toll have an impact on the war-ravaged people and prevent them from recovering from their trauma even if theynot living near the latest terrible events.

Meryem, who is living in a tent city in the southeastern city of Şanlıurfa with her mother and her sister's family, is among those who have been pursued by the trauma of the war, even within the confines of their safe haven in Turkey. Just seven months ago, after two miscarriages possibly due to the stress of the war, she gave birth to her daughter. She had finally obtained what she and her husband had longed for after four years of marriage.

However, their happiness did not last. Because of a "simple" case of high fever, she lost her daughter who could not be treated due to a lack of medical supplies and access to hospitals brought on by the war.

According to the latest figures of the United Nations Children's Fund (UNICEF), more than 11,000 children have died during the first four years of the conflict. Only seven days after Meryem lost her daughter, a bomb fell near her home during a condolence gathering. Among the victims - who had come to offer condolences - was her husband who died after being seriously wounded. "I was already deeply affected by the death of my baby, this event hit me one more time," she says bursting into tears.

Following intense sorrow and stress, she has become a diabetic. In the end, Meryem lost her eyesight.

"I cannot see right now," she explains. "I am trying to survive with the help of my mother and my sister living together with me in this tent." On Saturday, 14 more people were killed and 20 others wounded in a barrel bomb attack allegedly carried out by Bashar Assad regime's forces in Aleppo's Kallasa and Qasila neighborhoods. Scores of homes were destroyed during the bombing of the Kasel neighborhood, where bodies of civilians, including a little girl, were discovered under the debris. "Attacks in my country make me relive the same thing over and over," says Meryem.

For the time being, she refuses to see a doctor, either for her eyes or for her psychological state. "I need some time, I don't feel ready to see a doctor," she says. "I think I will never forget the death of my baby and husband. These memories will come with me wherever I go."

However, she is not completely pessimistic. "My biggest consolation is my belief in God. I am spending my time with zikr [remembrance of God in Arabic]," she adds. The young woman remains grateful to the Turkish government for the safe haven provided for her.

Turkey shares a 900-kilometer border with Syria and has sheltered more than 1.7 million Syrians, according to the U.N., with more arriving as a result of ongoing bloodshed in the war-torn country. According to government figures, the country has spent more than $6 billion so far for refugees, while the international community's help has amounted to $300 million.
Last Update: Jun 22, 2015 8:22 pm