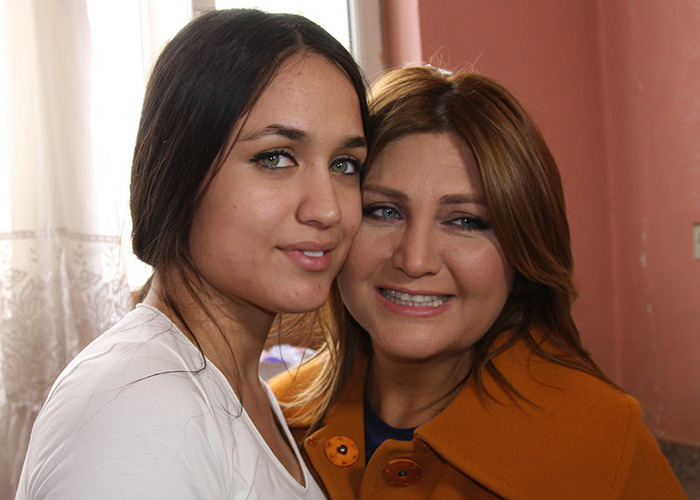 by Daily Sabah with AA Jun 23, 2015 12:00 am
A teenager Turkish song contestant Mutlu Kaya, from southestern Diyarbakır province, is expected to make a full recovery after a murder attempt by her boyfriend, her doctor announced Tuesday.

Mutlu Kaya, 19, became famous in the country when she first appeared on television during a song contest titled "Wonderful Voice". But just as she was beginning to become one of those rare voices from Diyarbakır to become a nationwide household name, a gunman, suspected to be Kaya's jealous boyfriend, shot her in the head inside her own home on May 18, an incident which has once again turned national attention toward violence targeting women.

On Tuesday, her doctor announced that Kaya had been transferred to a general hospital ward after she completed 37 days of intensive care treatment.

Ulaş Aktaş, a brain surgeon specialist at the Gazi Yaşargil Training and Research Hospital in Diyarbakır, told Anadolu Agency that while Kaya's medical condition was improving with each day, the road to her full recovery would be filled with many challenges.

"She is conscious now and can communicate with us. She has no neurosurgical problems at the moment. But she needs to go through a long period of physiotherapy and rehabilitation," Aktaş said.

One of the most painful challenges for the young girl, who once dreamed to the country's leading singer, will be her ability to speak. According to the doctor, although Kaya has shown remarkable resolve and has begun to communicate, her words and speech remain limited. The good news is that Kaya was now able to consume liquids and soft food, and she was making movement with the help of a wheelchair a few times a day.

Before she appeared on television and tragedy struck, Kaya used to work at a canteen in a school in Diyarbakır. She faced many challenges in her life before, including her inability to attend university because of financial difficulties.

When Kaya sang on television, she would leave everyone impressed, including the jury that included of well-known Turkish singer Sibel Can.

She was due to perform at a local show in Diyarbakır province before she was shot in the head and her singing ambitions were brutally torn down.

According to local news reports published in April, Kaya had received death threats from some of her own relatives who expressed their displeasure at her appearing in a television show.

Police arrested Kaya's ex-boyfriend, Veysi Ercan, on May 19 who was charged with a murder attempt on the young singer, whose life as she once knew may never be the same again.
Kaya's shooting drew attention to violence targeting women once more in a country where 294 women were killed by spouses and relatives last year, according to a women's nongovernmental organization.
Last Update: Jun 23, 2015 8:47 pm
RELATED TOPICS