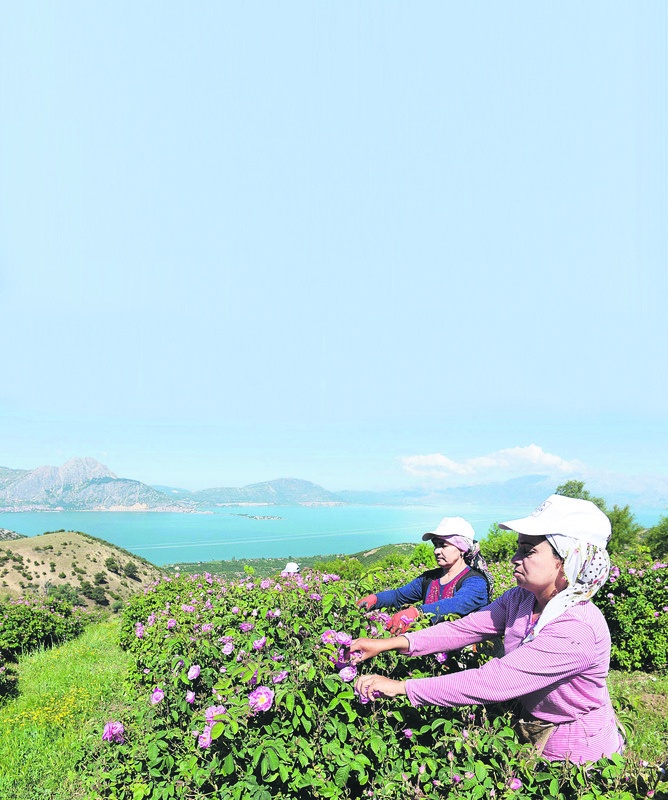 by Ayla Jean Yackley Jul 03, 2015 12:00 am
Many of the workers in the bright-pink fields in this southwest Turkish province have an unexpected connection with the flowers they are tending. They are Syrian refugees working as itinerant labourers during Turkey's harvest of its prized Damascus rose.

The harvest, set to end this weekend, transforms 16 million square m (4,000 acres) of land into beds of pink and perfumes the air around the town of Isparta, the world's biggest producer of Damascus roses and their costly oil, each June. Isparta still supplies Mecca's Grand Mosque, as well as French luxury brands that use the oil as a base for fragrances. Four tons of roses, roughly 2 million flowers, are required to produce 1 kilogram of rose absolute essence, which sells for about 7,500 euros or 10,000 euros if it's from an organic crop. Exports are valued at 15 million euros. The oil is a strategic product for perfume makers, serving as the base for most floral fragrances to prolong the scent. The six-week harvest is a "race against time," said Nuri Erçetin, who runs a rose-oil plant in Isparta that his father established in 1958. This year an April frost hit the crop, expected to be about 6,000 tonnes, cutting it by 20 percent. "We cannot obtain enough flowers, and there is a lack of a concerted effort to preserve the business, so it is in danger." France's Givenchy and Britain's Liz Earle procured Ercetin's roses for limited-edition fragrances, and he works with New York-based International Flavors & Fragrances, one of the worlds' biggest perfume-makers. But it is hard work producing the oil from the 7,500 tonnes of flowers that is almost entirely shipped overseas. Pickers are up at sunrise before the heat of the day burns off dew and must rush their product to processing plants within two hours.

Despite the steady rise in demand from a global fragrance industry worth almost $40 billion, Turkish output has declined for two decades and the tradition of rose cultivation is fading. A shrinking population - true for much of Turkey's rural communities amid rapid urbanisation - prefers to raise less labour-intensive products, like cherries and peaches for export, said rose growers. Aging rose bushes are another culprit. Larger producers now employ migrant farm labourers including Syrian refugees. Turkey harbours nearly 2 million people from Syria who have escaped the violence that erupted there in 2011 and are increasingly working in low-paying agricultural jobs.

There is no rose industry in war-torn Syria. Turkey has a 60 percent share of the market, while Bulgaria controls the rest. Named for the ancient Syrian capital, the 30-petal Damascus rose, also called Damascena or Damask, is one of just a handful of the 150 species of roses from which oil can be extracted. It may have first been brought from Syria to Europe by Crusaders in the 13th century. Shakespeare writes of "gloves as sweet as damask roses" in "A Winter's Tale". Locally, the flower was cherished for its delicate taste and medicinal qualities, said Banu Özden of the Culinary Arts Centre, which seeks to preserve Turkish food heritage. But rose is now viewed as old-fashioned, she said, surviving in the odd dessert, like the eponymous "gullac," or the starchy Turkish delight confection. "It may not die now, but it might not survive another 20 years," Özden said.
Last Update: Jul 03, 2015 10:59 pm
RELATED TOPICS