Villagers exact their own justice on human smugglers 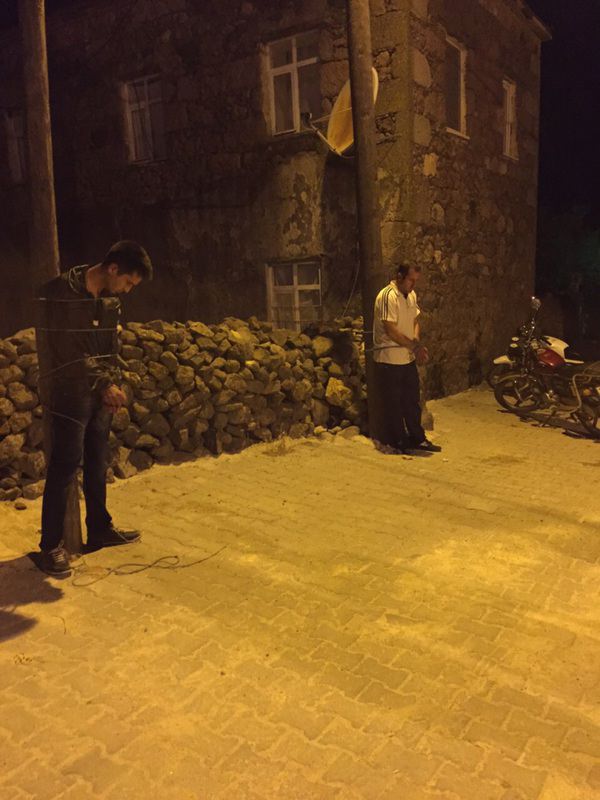 by Zeynel Yaman Jul 07, 2015 12:00 am
Residents of a Turkish village on the coast of Aegean Sea, a popular route for illegal immigrants heading to Greece, are up in arms against smugglers helping migrants.

Fed up with smugglers using their fields and empty houses for their smuggling operations to the Greek island of Lesbos, locals in Bademli village in the western Turkish province of Çanakkale argued with a group of smugglers they confronted on the coast. Soon, the smugglers returned in a convoy of cars and opened fire into the air in the village square in an attempt to intimidate the villagers. Armed with pistols and rifles, the villagers quickly overpowered the group and captured five smugglers during the night-time clashes. Five men were tied to two poles at the square and made an example of for other smugglers as villagers took their photos. The men were handed to gendarmerie troops arriving in the village next morning. One of the men was arrested while the others were released. The smugglers returned the next day, but as they were scared to enter the village, they opened fire into the air near the village. As gunshots rang, villagers felt their safety was in danger. Now armed with rifles, they have started patrolling their fields and summer houses to protect against smugglers, and the two sides occasionally exchange fire at night.

A villager who preferred to remain anonymous said hundreds descend into the village, which has a population of 250, every night in trucks, mostly migrants. The villager said trucks also carry boats, and they were attempting to demolish fences around the fields to use them as well as houses as waiting areas for migrants or other purposes.
Last Update: Jul 07, 2015 7:59 pm
RELATED TOPICS