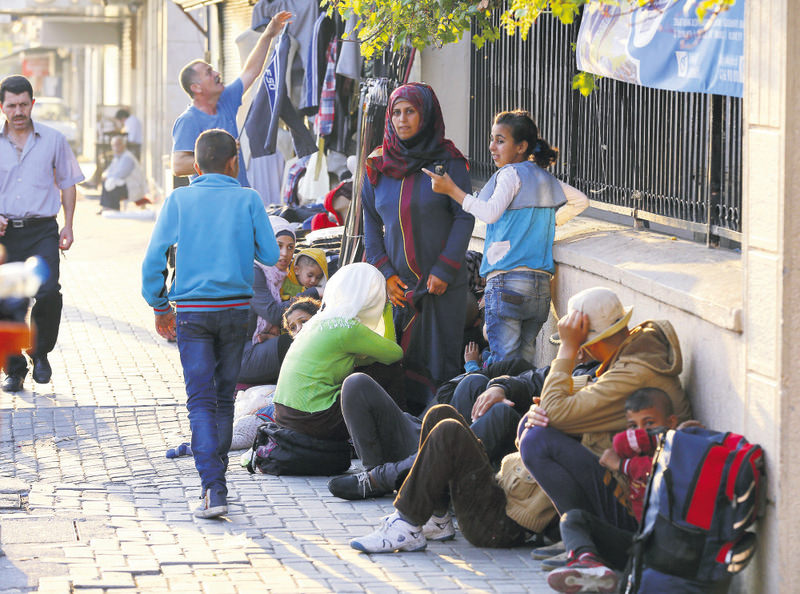 by Daily Sabah with AA Jul 10, 2015 12:00 am
Turkey's western city of İzmir, heavily populated by descendants of Turks who migrated from the Balkans, is now a main attraction for another wave of migrants: Syrians. One of the biggest cities in Turkey, İzmir, with its location on the coast of Aegean Sea, has recently become the favorite destination of displaced Syrians looking to reach Greece, and is the gateway to European countries where they hope to pursue a better life.

Basmane district in central İzmir is swarming with migrants who are fleeing the four-year-old conflict in Syria. Turkey hosts over 1.8 million Syrians with only a small fraction of them residing in modern refugee camps dotting the lengthy border of the country with Syria. Others, facing an uncertain future often head to the cities on the Aegean Sea. Spending most of the day sleeping in parks, in the courtyards of mosques and abandoned buildings, they secretly board the dinghies, boats and vessels at night for a dangerous journey to the Greek islands.

Muhammed Salih Ali, head of a nongovernmental organization helping Syrian refugees told Anadolu Agency that the number of Syrians seeking to illegally cross into European countries has swelled in the past two weeks in İzmir. "We tell them it is suicide. Hundreds have already died in the Aegean. We show them photos of migrants killed when their boats sank but they don't listen to us. They tell us 'we will die anyway if we stay here'," he says. "Smugglers charge up to $1,000 for passage to the Greek islands from İzmir. They charge less if the boats are less seaworthy. The coast guard captures them, but after they are released, they board the boats again," he said.

Muhammad Abdurrahman Meshal was in Yarmouk, a camp for Palestinian refugees in Syria's Damascus before he fled to Turkey. He claims they had to leave Syria as they were tortured and left starving. Meshal, 36, reached Turkey with his family as part of a group of 355 people who first traveled to the southern city of Mersin. From Mersin, they sought to cross into Italy via the Mediterranean Sea. Two Syrian human smugglers who identified themselves as Abu Safar and Abu Salim collected over $ 1.7 million from the group, promising to arrange a secret trip to Italy, but they later ran off with the money, Meshal says, leaving the group stranded in Mersin before they managed to travel to İzmir.
Last Update: Jul 10, 2015 8:12 pm
RELATED TOPICS