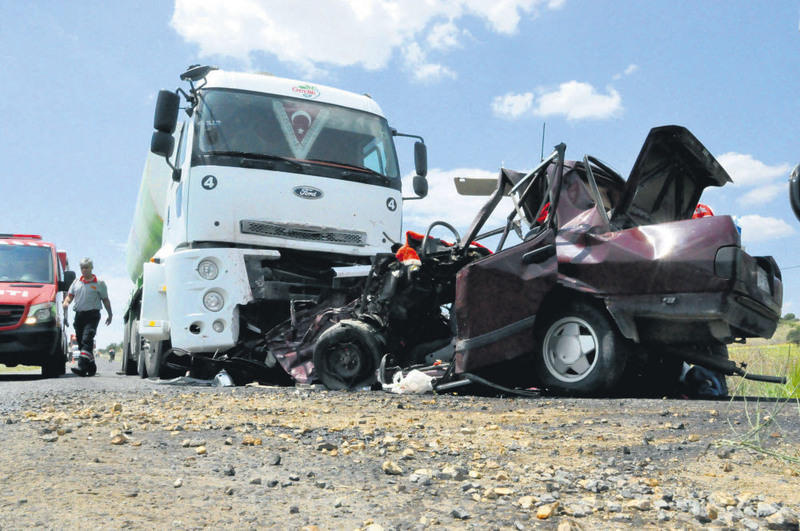 Figures on traffic accidents in 2014 released by Turkish Statistical Agency (TurkStat) show that fatal accidents slightly declined in the country, but they still kill more than 3,500 people every year

The state-run Turkish Statistical Institute (TurkStat) on Tuesday released figures on traffic accidents in 2014. The number of accidents was 1.1 million, indicating a slight drop from 1.2 million in 2013.

Figures show that 3,524 people were killed in 168,512 accidents and another 285,059 people were injured. The majority of accidents did not involve casualties.

According to TurkStat's figures, 35.3 percent of fatal accidents occurred in cities, towns, villages and other settlements, while the remaining 64.7 percent occurred near uninhabited areas such as on highways far away from cities.

Drivers had the highest casualty rate in accidents with 42.7 percent, followed by passengers and pedestrians. Over 76 percent of those killed or injured in the accidents were men, while the rest were women.

More than half of the vehicles involved in accidents were cars, followed by motorcycles, pickup trucks and minibuses.

As with previous years, fatal accidents were most common in August, while February was the month with the least amount of fatal traffic accidents, according to the statistics, and most of them occurred on Fridays. Statistics showed that most traffic accidents occurred during the daytime.

Although the statistics showed a decline in the number of accidents, the figure is still quite high when compared to earlier this decade. For instance, only 620,789 accidents occurred in 2005, though the fatalities, at 4,500, were higher than the fatalities in 2014. More than 1 million accidents have been recorded since 2009 with roughly 12 people dying in traffic accidents on a daily basis, according to the statistics.

Though TurkStat's report on accidents did not speculate on the subject, reckless driving is viewed as one of the major causes of accidents with both motorists and pedestrians often violating traffic rules. The government has undertaken a campaign against "the traffic monster," which at one point claimed more lives annually than natural disasters, terrorist attacks and crimes. Yet, despite strict enforcement of harsher fines and sentences against those violating traffic rules, motorists keep ignoring them.

A buildup in traffic especially in holidays contributes to the rise in traffic accidents with motorists rushing to reach their holiday destination. Eid al-Fitr, a religious holiday, will begin this Friday and will continue until next week, although many people have already taken a few days off for a longer holiday and have headed to their hometowns or holiday resorts to spend Eid. Last year, 92 people were killed in holiday travel across Turkey. Experts warn motorists not to spend more than eight hours behind the wheel and hit the road early to avoid the fatigue-inducing effect of mid-day driving.
Last Update: Jul 14, 2015 7:44 pm
RELATED TOPICS