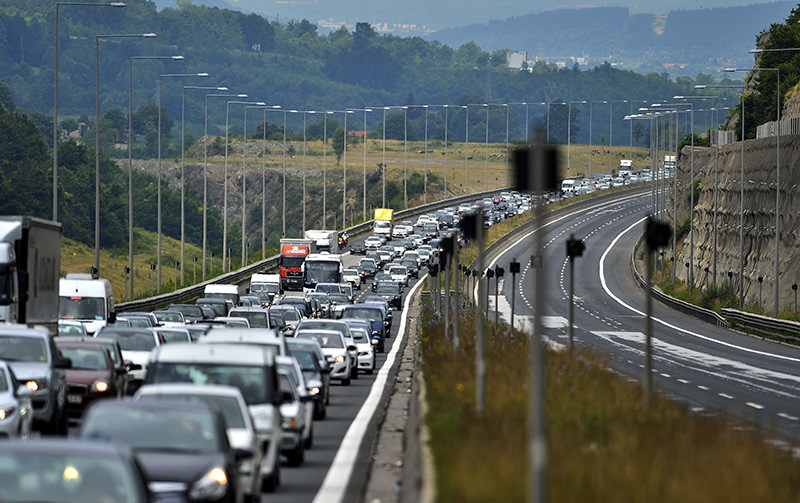 Eid al-Fitr, the celebratory wrap-up to the Muslim holy month of Ramadan, is a joyful occasion all around, except for those braving long journeys to vacation resorts and hometowns and the dreaded return home, both amid staggeringly slow traffic.

An estimated 7 million travelers, almost as big as the population of a small European country, namely Switzerland, did not miss the opportunity of an almost weeklong holiday. There was already a four-day official holiday and people combining it with their annual leaves had a chance to leave early, either by cars or by heavily booked buses and flights.

However, this massive movement of people also means an increase in accidents. Sixteen people were killed and over 65 were injured in accidents involving holidaymakers one day before eid and the death toll may increase during eid and on Sunday when people will rush back home before the end of the holiday.

Accidents will happen as drivers often violate traffic safety rules in the country, but experts say that the casualties may be minimized by a few safety tips such as not getting behind the wheel in a state of drowsiness and taking short naps on long trips.

Traffic police also increased the frequency of roadside inspections, especially on main routes where eid migration is at its highest, especially from Istanbul to cities in the inner regions of Anatolia and to the south where popular vacation resorts are located. Authorities said traffic police squads were deployed at every 10 kilometers on highways such as TEM, which spans northwestern Turkey, Istanbul and northern cities. TEM was the route most affected by traffic jams that took hours to end. Authorities lifted fees on toll roads and bridges in Istanbul to decrease traffic, though it was little solace for frustrated motorists who toiled in lengthy snarls.

Traffic accidents claimed over 3,500 lives last year and the death toll was especially high over holidays such as Eid al-Fitr and Eid al-Adha. In sermons delivered before eid prayers on Friday, imams raised awareness to traffic safety.

Istanbul, the most populated city in the country with a population of more than 14 million people, was almost emptied on the eve of eid with millions leaving the city, only to return on Sunday to lead to renewed traffic snarls. The city that holds the unenviable title of having the worst traffic in the world, according to the TomTom Traffic Index, was a sight to see with few cars on the streets throughout eid. The few remaining residents of the city spent the holiday outdoors with temperatures reaching to 30 degrees Celsius. A 50 percent discount in public transportation fares throughout the holiday added to the joy of Istanbulites.