Return a nightmare for vacationers 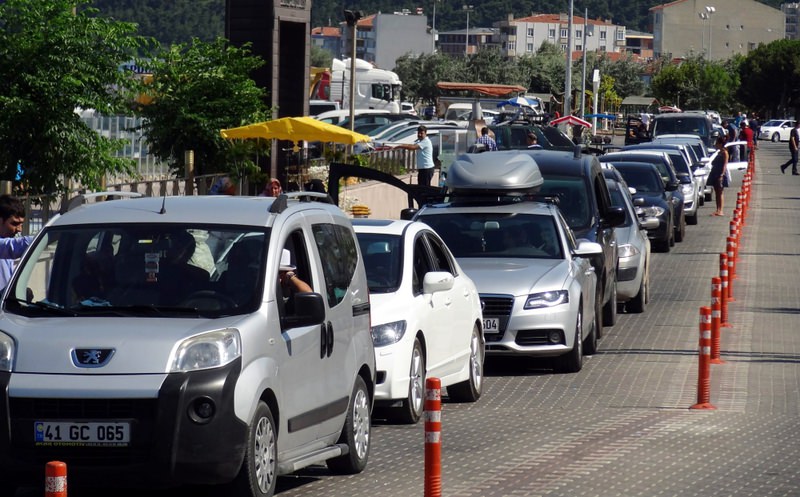 Traffic congestion, increasing risk of accidents and hours spent on the road are what many millions of Turks faced on their return from a brief holiday away from home

Millions of Turks were on the road on Sunday, the last day of the Eid al-Fitr holidays, causing serious traffic congestion and collision risk. Traffic in major motorways had begun by early yesterday, with more expected later in the day. Authorities said they are taking every possible precaution to prevent accidents and smooth running of the traffic but warned that commuters usually spent hours on the road on the first and the last day of the holidays. The three-day Eid al-Fitr holidays was extended by a day, with most using the opportunity to get away from the cities.

Kilometers-long lines were formed at the Çanakkale and Bandırma ferry ports, major intersection points for holiday-goers coming from the Aegean and Mediterranean region toward Istanbul.

Istanbul Metropolitan Municipality and the traffic units of Istanbul Police Department have collaboratively prepared for the heavy traffic by increasing the number of officers and units on duty in the possible areas of heavy traffic, especially in the junctions and on the D-100 state road and the European route E80, widely known as "TEM" or "E6" which crosses the Bosporus via the Fatih Sultan Mehmet Bridge.

Ferries operating on the Eskihisar-Topçular line will also make additional trips to satisfy the demand, as many vacationers choose to cross the Gulf of İzmit to reach Istanbul instead of driving an extra 110 kilometers.

Istanbul, with a population of approximately 17 million people, is widely known for its congested traffic as it hosts almost 6 million vehicles

Authorities said traffic on the major motorway TEM is running smoothly as of yesterday afternoon, but noted that those who had tried to escape the congestion by coming a day earlier had created a bottleneck near the Kocaeli intersection of the highway.

Authorities said TEM saw serious increase in traffic during such holidays due to major vehicle flow from the Mediterranean region added to the normally busy flow from Ankara. Officials warned drivers to be patient and not to block the safety lane. Especially old model cars posed a risk in hot weather, said one official, noting that excessive heating of the radiators caused cars to block traffic.
Last Update: Jul 19, 2015 9:09 pm
RELATED TOPICS