Edirne mosque to be visible from Greece and Bulgaria 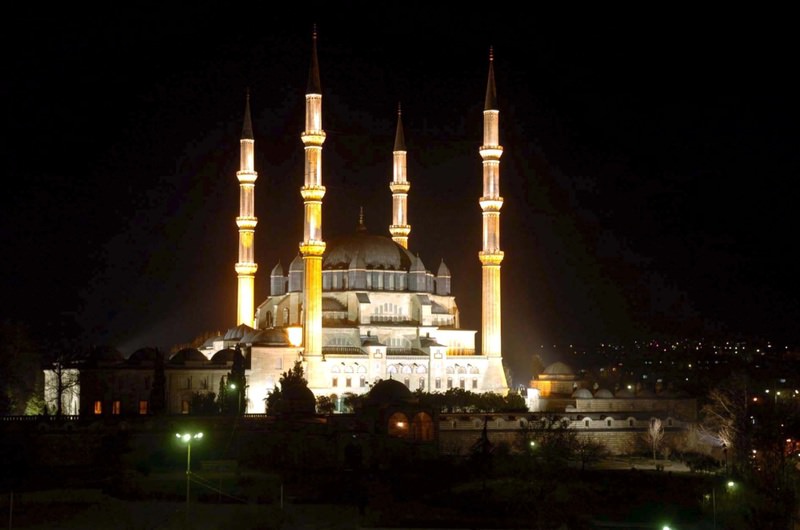 by Daily Sabah Jul 21, 2015 12:00 am
An Ottoman-era mosque in northwestern Turkey will be illuminated so brightly that it will be visible from Bulgaria and Greece, Turkey's northwestern neighbors, a Turkish governor said.

Dursun Ali Şahin, the governor of Edirne province, said the Selimiye Mosque, a landmark in the province, will be fitted with extra lighting fixtures that would make it "clearly visible from Greece and Bulgaria," which border the province. The nearest Greek or Bulgarian town is located 20 kilometers away.

Şahin said at a press conference yesterday that over 2,600 lighting fixtures will be installed on mosque's dome and courtyard. "It will be visible at night as far as 100 kilometers," Şahin said, adding that it would cost some TL 1.5 million ($558,000).

The governor said Selimiye Mosque is a favorite spot for tourists, pointing to the 13,500 people who visited the mosque on Sunday, the last day of Eid al-Fitr.

Selimiye Mosque was built in the 16th century and is one of the iconic works of notable Ottoman architect Mimar Sinan who was commissioned by Sultan Selim II to build the mosque named after the Ottoman ruler. The mosque, which has four minarets, is regarded as a masterpiece of Ottoman architecture and was included on the UNESCO World Heritage List in 2011.
Last Update: Jul 22, 2015 2:11 am
RELATED TOPICS