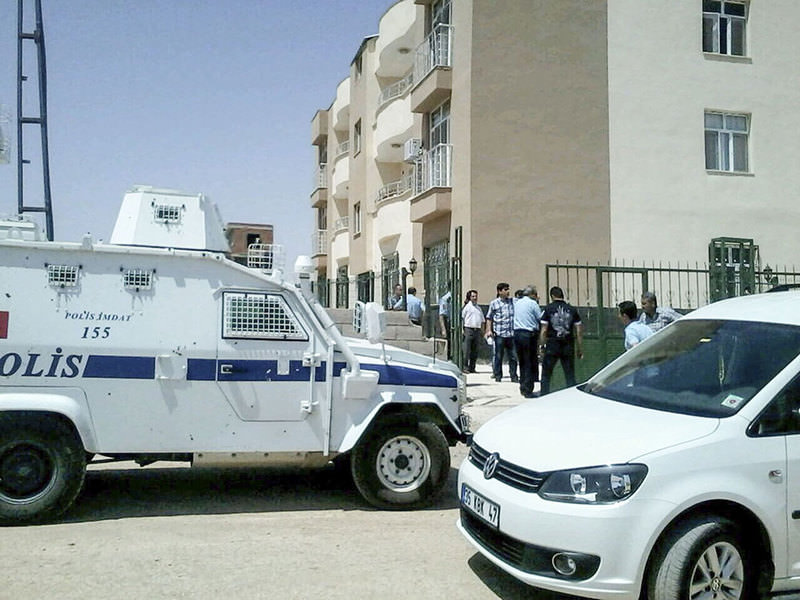 by Mehmed Cavid Barkçin Jul 22, 2015 12:00 am
The outlawed PKK has claimed responsibility for the killing of two police officers in their home in Turkey's southern province of Şanlıurfa on Wednesday, adding to the escalating of violence committed by the militants since the announcement of an end to a cease-fire by the senior PKK commanders.

Two police officers were found dead in their home in Turkey's southeastern province of Şanlıurfa on Wednesday. The men were sharing a flat in Ceylanpınar, a town on the Syrian border that lies 120 kilometers east of Suruç, where Monday's bomb blast killed at least 32. The People's Defense Forces (HPG), an armed wing of the PKK, released a statement Wednesday on a PKK-leaning website, saying "the attack was carried out in retaliation for the Suruç suicide attack."

The officers were shot in the head, said Şanlıurfa governor İzettin Küçük. One of the officers was serving in the city's counterterrorism unit, while the other was serving as a riot policeman. The suspects were identified as Feyyaz Yumuşak and Okan Acar.

The incident occurred two days after a bombing suspected to have been perpetrated by the Islamic State of Iraq and al-Sham (ISIS), that claimed at least 32 lives and left more than 100 injured in Suruç. Many police forces were on standby due to Monday's suicide bomb attack.
By killing security personnel in Adıyaman on Monday and slaughtering two police officers in their home on Wednesday, the PKK has unilaterally broke the truce that was in effect since March 2013 after its imprisoned leader Abdullah Öcalan made a call as part of the reconciliation process that was launched to end the Kurdish question.

On July 12, shortly after the announcement by the PKK to end the cease-fire, two PKK groups of roughly 50 militants blocked the Gürbulak and Iğdır roads, opening fire on trucks and throwing Molotov cocktails. During the attacks, three trucks caught fire and one Iranian was injured. A day later, PKK militants clashed with gendarmerie forces after they seized a vehicle belonging to the municipality of Göle in Ardahan province. One person died and two others were injured after the militants opened fire on a bus at the scene of the clashes. On July 22, a PKK group and burned 12 trucks and cars after setting barricades on the Iğdır Erzurum highway. A short clash erupted following the incident between the militants and security forces.

Many countries around the world recognize its terrorist capabilities. However, some countries such as Russia, China and Switzerland deny defining the organization as terrorist, while Switzerland has implemented some measures, namely banning the collection of funds, to control and restrict the PKK's actions.
The PKK's recent incursions on Turkish soil signifies Turkey's hesitation and reluctance to provide support to the Democratic Union Party (PYD) and People's Protection Units (YPG) in Syria, despite pressure from the U.S., as they are seen as affiliated with the PKK by the Turkish government.