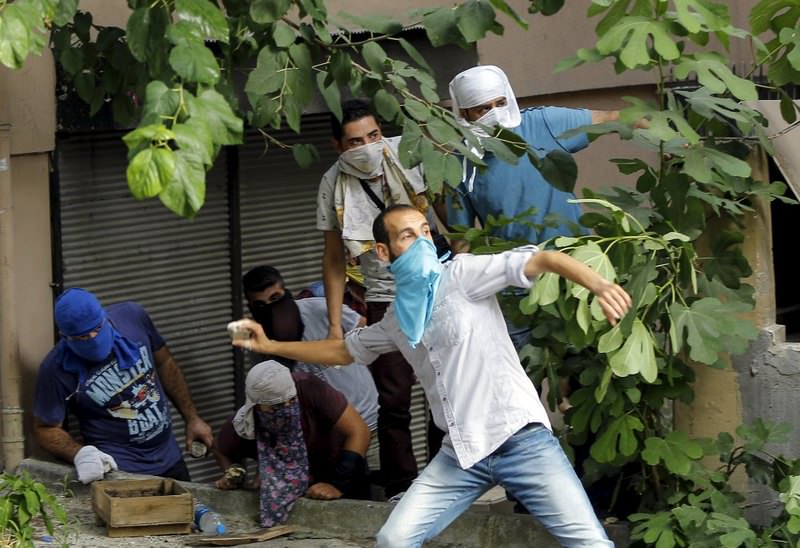 by Yusuf Ziya Durmuş Jul 27, 2015 12:00 am
A funeral for a member of the Revolutionary People's Liberation Party-Front (DHKP-C) terrorist organization turned violent against police in Istanbul yesterday.

DHKP-C supporters threw Molotov cocktails and rocks at police dispersing the crowd due to their unauthorized rally after the funeral of Günay Özarslan in the Gazi neighborhood, a hotbed of DHKP-C riots.

DHKP-C supporters set up barricades on the streets of the neighborhood located on Istanbul's European side while police fired water cannons and teargas to disperse them. A journalist and several passersby were injured in the melee. The funeral for Özarslan, who was killed in a clash with police conducting operations in Istanbul districts on Friday, was originally scheduled for Saturday, but the violnce that broke out delayed the funeral. Clashes between police and DHKP-C supporters were underway as the news went to print and it may likely cause the postponement of the funeral once again.

Gazi is among one of the so-called strongholds of the DHKP-C in Istanbul, along with Okmeydanı, a working-class district where clashes between DHKP-C supporters and police are common.

Özarslan was killed when she allegedly fired on police attempting to arrest her. Thousands of police officers had taken part in a counter-terrorism operation in Istanbul on Friday after an escalation of violence by the PKK and Islamic State of Iraq and al-Sham (ISIS) in Turkey.

The DHKP-C had claimed responsibility for a shooting in Okmeydanı on Saturday that injured two police officers and a civilian.

The DHKP-C advocates a far-left ideology and is a common presence in Istanbul protests, ranging from the 2013 Gezi Park incidents to the latest outburst of violence last week following a suicide bombing in the southeastern province of Şanlıurfa that killed 32 people, including activists linked to far-left groups. It is designated a terrorist organization by Turkey and the U.S., whose embassy in Ankara was the target of a 2013 attack by a DHKP-C member. The organization last hit the headlines with the killing of a prosecutor at a courthouse in Istanbul in March.
Last Update: Jul 27, 2015 1:46 am
RELATED TOPICS