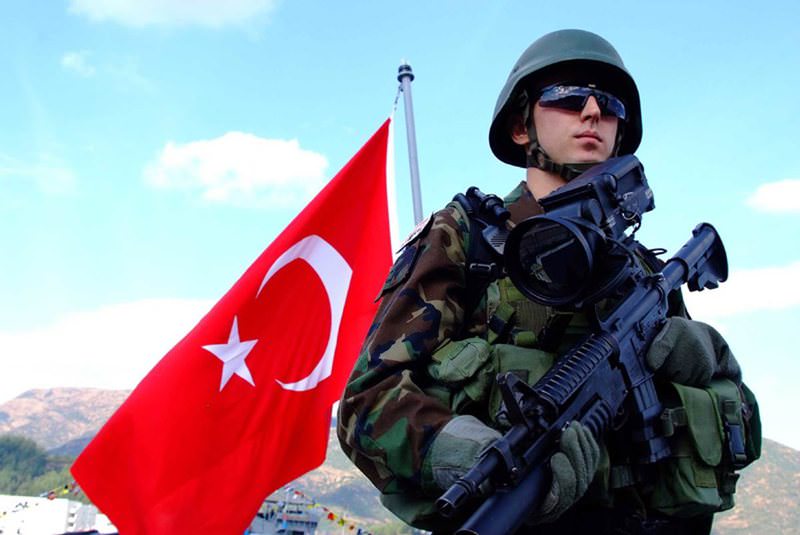 As Turkey stepped up efforts in the fight against PKK and ISIS terrorists across its borders and a large-scale operation on terrorist groups at home, a survey has revealed that the campaign was supported by the majority of the society

A recent Objective Research Center (ORC) survey conducted in the wake of an extensive campaign against terrorism has found that the majority of participants support the operations conducted by the Turkish Armed Forces. Prime Minister Ahmet Davutoğlu said on Monday that the operations against the Islamic State of Iraq and al-Sham (ISIS) and the PKK will continue until the threat posed by both terrorist groups is eliminated.

The ORC conducted the survey in 26 provinces with 1,320 people on July 25 and July 26. It found that 80.5 percent of respondents back the Turkish offensive against terrorist groups. The survey further found that a large portion of the support comes from the base of the Justice and Development Party (AK Party) and Nationalist Movement Party (MHP), at around 95 percent.

On Friday night and in the early hours of Saturday, Turkish fighter jets bombed PKK camps in northern Iraq and ISIS positions in Syria near the border with Turkey. PKK targets outside Turkey were also hit on Sunday night.

Davutoğlu said in a live interview with the private A Haber and ATV television channels on Monday: "We have both the nation's and international support in the fight we carry out against ISIS, the PKK and the DHKP-C [Revolutionary People's Liberation Party-Front]. Therefore, we will continue the struggle until achieving definite results."

His remarks came amid nationwide anti-terrorist operations conducted by security forces after alleged attacks by the PKK (which is listed as a terrorist organization by the U.S., EU and Turkey), claimed the lives of three police officers in the Ceylanpınar district of southeastern Şanlıurfa and in Diyarbakır provinces.

"The PKK has committed 281 terrorist acts since the June 7 general elections, which corresponds to around six terror acts per day," Davutoğlu said.

He warned against the misconception that since Turkey was going through a transitional period, its security forces were incapable of taking effective measures.

He said Turkey was the key guarantor of regional stability, "so its role as protector of stability poses a threat to ISIS when it tries to create chaos in the region."

Davutoğlu also said that this would not be possible if only ISIS was destroyed, explaining that the Syrian regime's persecution must also end.

He said that the U.S. had considered Turkey's sensitivity on these issues in discussions that led to an agreement between the two countries, which saw Ankara allowing the U.S.-led international coalition aircraft to use Turkish airbases to conduct airstrikes on ISIS.

A safe zone in northern Syria proposed by Ankara could have saved thousands of lives and prevented terrorist groups like ISIS from gaining a foothold in the region, Davutoğlu claimed.

Turkey has approved U.S. access to the strategic İncirlik Air Base to deploy manned and unmanned aerial vehicles as part of the fight against the terrorist group.

"If there is one person who is responsible for all these terrorist crimes and humanitarian tragedies in Syria," Davutoğlu said, "it is [Syrian President Bashar] Assad [and his] approach using chemical weapons and barrel bombs against civilians.

"Because of that power vacuum, terrorist organizations like ISIS have been able to be active in Syria," Davutoğlu told CNN's Christiane Amanpour.

"In order to eliminate threats, we have to fight against ISIS, yes, but we have to create a new situation in Syria so that there will be no base for any terrorist organization to reactivate this type of terrorist activity," Davutoğlu told Amanpour.

Davutoğlu said Turkey, "from the early stages of the Syrian crisis," had been suggesting the idea of establishing a "safe area" along the Turkish-Syrian border, in which Syrian refugees currently in Turkey and in neighboring countries along with those displaced in Syria and Iraq could be kept.

The area could also serve as a safe zone "where terrorist groups cannot enter, and where civilians could feel safe from regime attacks and terrorist groups," he said. "Now it is time to have such an area [safe from] ISIS attacks especially."

Ankara's safe haven appears to have gained more traction with the latest developments.

"In the last four days ... the PKK has killed several police, several soldiers and civilians, so, in a high-level security meeting, we instructed our security forces that there should be a synchronized fight against terror, and whoever is committing terrorist activity in Turkey, we must be active against them."
Last Update: Jul 28, 2015 7:42 pm
RELATED TOPICS