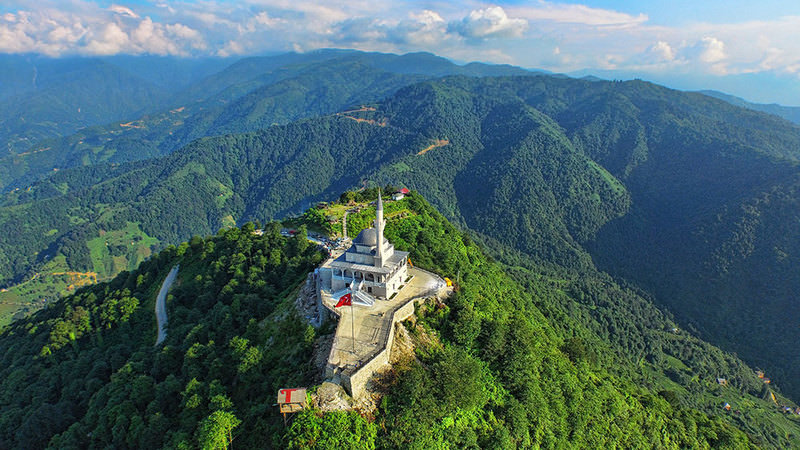 by Özge Bulur Aug 06, 2015 12:00 am
Construction of the Kıble Mountain Mosque, built on the top of the 1,130-meter mountain in the Black Sea's Rize province in Turkey, has been completed.

After paving the road to the mosque with asphalt, the Kıble Mountain Mosque is on the verge of being inaugurated by President Recep Tayyip Erdoğan in an opening ceremony. As a reference to the Islamic term "qibla" (spelt 'kıble' in Turkish), the direction of the Kaaba in Mecca where Muslims face during daily prayers, Rize province's Güneysu district is metaphorically named "Kıble" since the main ridge of the mountain faces Mecca and the mountain top can be seen nearly from all sides of the district.

As the Güneysu district governor, İhsan Selim Baydaş told Anadolu Agency, the mosque had been built first in the 19th century by Moşula Mehmet Efendi and Kuş Ahmed Efendi. However, the wooden structure was burnt during a fire in 1960. Afterwards, a simple concrete hut replaced the mosque as a place of prayer by Yusuf Yılmaz Hocaefendi. In 2010, then Prime Minister Recep Tayyip Erdoğan visited the mosque and instructed local authorities to restore and expand the mosque. As for the newest version of the Kıble Mountain Mosque, the historic Şemsi Ahmet Paşa Mosque in Istanbul's Üsküdar neighborhood was used as a model.

Yusuf Yılmaz, the architect of the Kıble Mountain Mosque, also provided some information regarding the structure of the mosque and told Anadolu Agency, "70 square meters of the mosque are reserved for men, while 45 square meters of it are reserved women. The porticos are 135 square meters and about 200 people are able to worship in the closed area. As to the open field (surrounding the mosque), there can be a total of a thousand people in worship simultaneously. The Imam's residence was planned as 85 square meters. While the dome of the mosque is 13 meters high, its minaret's height is 27 meters. Additionally, some arrangements have been made in the field of the mosque's fountain to allow the flow hot water. Day care rooms are also designed next to the worshiping area in the women's section."

Apart from the reconstruction of the Kıble Mountain Mosque, some walking paths, rest areas and excursion spots have also been built with donations from the local people. As published by Rize's Office of Mufti, the types of mosques in the province are sub-categorized mainly as center mosques, town mosques, village mosques and historic wooden mosques. Apart from those approximately 250 mosques are located in the city, the mosque on the top of the Kıble Mountain, which is teeming with life thanks to the vegetation covering the slopes of it, is expected to attract many tourists from around the world.